At What Temperature Does Beer Freeze? (Infographic) 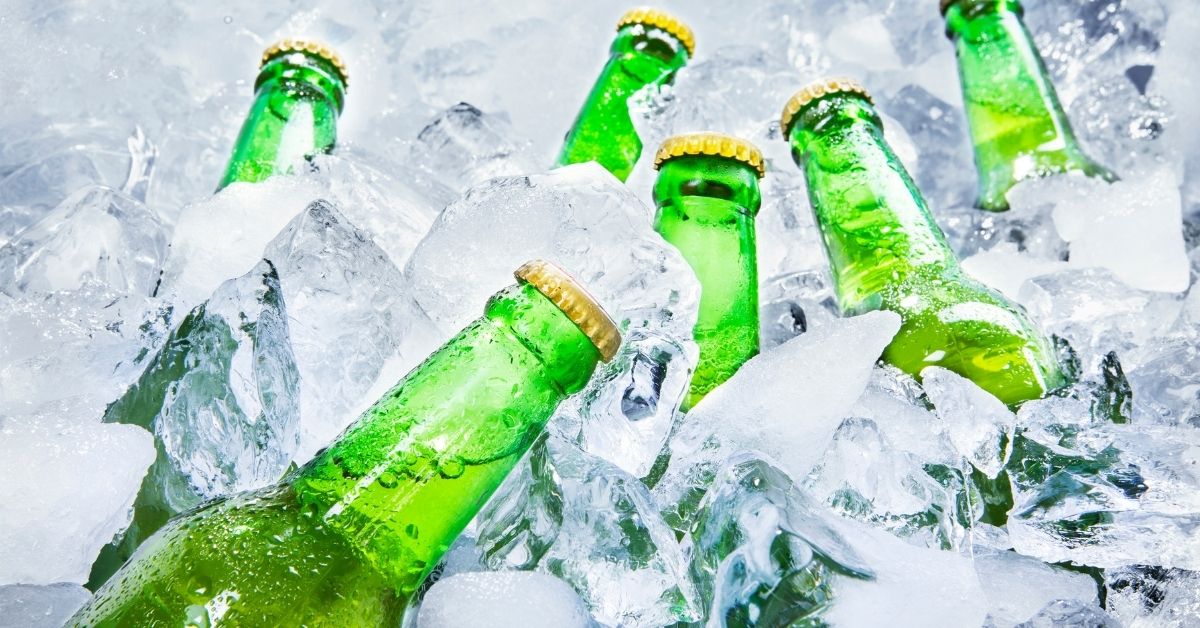 You thought you were ready to host. You said yes to having some friends over for the big game that starts in only a half-hour. Then reality comes crashing down on you…

You realize all your beer is at room temperature. You bought it, then absentmindedly never popped them in the fridge.

What to do in this crisis?! Your friends may never come over again if they’re served warm beer, especially on a hot summer day. A half-hour is not nearly enough time to get your bottles of beer cold enough in the refrigerator. So in your mad desperation, you have a good idea!

It’s simple – pop that case of beer in your home freezer. Why have you never thought of this before? You have seen a bottle of vodka sit in freezers indefinitely. Why not beer?

Why Not Beer Indeed.

There’s a good reason why hard liquor can live in the freezer and beer cannot. Having any alcohol content doesn’t mean the same results will occur when exposed to different temperatures.

Maybe you have seen rock-hard beer cans bloated strangely after leaving them too long in a freezing car. Maybe you have encountered unopened beer bottles exploding after being left in freezing temperatures for the whole day. (Then have to clean up that big mess!)

This article explains how these horrific tragedies can happen to our beloved alcoholic drinks, and why placing a bottle of beer in the freezer isn’t necessarily a bad idea. You just need to know at what point your brew freezes so you know when to take it out of your freezer. That way you can sip it at its best quality instead of lick it off the freezer walls.

First, Let Me Be Your Bill Nye the Beer Science Guy

What is even physically happening to our beloved beer when it reaches the freezing point of the beverage? Well, allow me to get a little scientific and be your Bill Nye the Beer Science Guy for a moment to explain.

(Seriously, I learned the following from Bill Nye when I was a kid but forgot exactly how it worked until I just reviewed it. Must be all the beer I drink.)

Let’s take pure water, made up of one oxygen and two hydrogen atoms making one molecule of H2O. These molecules have energy when heat exists, moving and bouncing off each other. But when these molecules are cooled, that average energy decreases.

The attractive forces between molecules draw them closer together as heat is removed. They get so packed together, the liquid state, once fluid, becomes solid.

Boom! I don’t know if those fun facts will help you pick up a cutie at the bar, but it’ll impress any kid you know.

What Temperature Does Beer Freeze vs. Water vs. Soda?

Water and beer do not freeze at the same rate. The reason for this is that other molecules in a liquid can create different freezing points. Think of it like when there are more people at a party, it takes longer to scatter should the cops come.

So since beer (even light ales) has more ingredients differentiating them from water, it has a lower freezing temperature than water and soda because of the higher alcohol concentration. It’s typically below 30 degrees Fahrenheit, which I cover in more detail soon since it depends on the beer.

Why Does Alcohol Content Make Liquids Freeze Slower Than Water?

Great question. Some molecules are stronger energy-wise than others. Basically, the weaker the molecules in a liquid, the lower the freezing point.

Let’s take the active ingredient in all types of beer and alcoholic beverages, the psychoactive drug ethanol, or ethyl alcohol. On its own, it’s a flammable, colorless liquid. It is so pungent and strong it can be used as an engine fuel and for medical purposes, such as a disinfectant for wounds. It’s made by fermenting sugars with yeast.

It’s a little weird to find out that the same substance used in our hard drinks also powers our cars, but bear with me.

Ethanol has strong hydrogen bonding interactions, meaning a higher freezing point. The freezing point of pure ethanol alcohol is -173 degrees Fahrenheit, or -114 degrees Celsius. Note the negative symbol in there. It has to be an insanely cold winter night even for the North Pole’s standards to turn pure alcohol into a solid.

But we’re talking about a liquid that is essentially one hundred percent alcohol. When figuring out how long it takes to freeze a liquid, the levels of alcohol matter. So we look at the proof, which is the measurement used across the world to determine the strength of alcohol in a beverage.

It’s that percentage of alcohol by volume we always look for on the bottle that helps us decide how wasted exactly we want to be that night.

How is Alchohol by Volume (ABV) Measured?

In America, Proof as a measurement is two times alcohol by volume. So whiskey that says 100 proof on the bottle means it has half of alcohol by volume, at 50 percent. If it’s 80 proof, then it’s at 40 percent ABV.

So basically, the lower the proof in an alcohol beverage, the warmer the threshold to reach that freezing point. So your vodka bottle won’t ever freeze but your beer will because the amount of alcohol in beer is less than vodka.

I know what you’re thinking. This is proof enough that proof is the proof for how to measure the exact freezing point of alcoholic beverages. Good, we’re on the same page.

Liquors with a higher level of alcohol won’t freeze given their higher level of ethanol. Since pure ethanol alcohol freezes at -173 degrees Fahrenheit, it should come as no surprise that a fair amount of ethanol content means freezers can’t freeze solid a bottle of vodka or gin.

Another reason hard liquor takes extremely lower temperatures to freeze it solid is because of the various components swimming around inside the glass bottle together. Each component, such as ethanol, needs its own temperature to freeze solid. In other words, your freezer can’t possibly get cold enough to freeze a high-proof liquor.

Any Other Factors Besides Alcohol Content Go Into Freezing Temperature?

Why yes, actually. How smart of you to ask. The material and size of the container the drink inhabits also determine the temperature for which the liquid freezes.

The bigger the container, like a keg, the easier it is to control the large amount of liquid (and energy) inside and not let it solidify. A beer bottle or can is much harder to control given the small amount of liquid inside. Thus, the contents of smaller containers freeze more easily and quickly.

The amount of sugar within it is also a factor, since sugar is a preservative and keeps water from condensing. The more sugar, the less likely there will be ice crystals inside the beer that taint the experience. So, the more sugar is in the beer, the lower the temperature needs to be for it to become frozen beer.

It’s because of sugar that beer typically doesn’t freeze completely solid. If anything, a higher ABV beer will get slushy or grainy. The more water inside the beer, the more solid it will get if frozen.

So, What is the Freezing Point of Beer?!

I know, I know, this is the question you’ve been asking from the start but there’s not a simple answer. (Hence, everything I explained to you above)

The temperature beer freezes, just like hard liquor, depends on the alcohol level of the beer. From higher alcohol beers like craft brews to ones with less alcohol like Bud Light, the freezing temperature of the beer will vary accordingly.

For instance, a beer at 5 percent will freeze once it hits 29 degrees Fahrenheit. Makes sense, since beer is usually 95 percent water, and water freezes at 32 percent.

Now jumping up to 6.5 percent ABV beer, it will freeze at 28 degrees. 8 percent is at 27 degrees Fahrenheit and so on. A good rule of thumb is every one and a half percent increase in ABV, lower one degree.

What’s the Best Temperature for Beer to Drink?

That answer depends on the specific type of beer. The serious beer drinker knows some beers shouldn’t be as cold as others to be fully enjoyed.

Full-bodied lagers and pilsners shouldn’t be too cold or you’ll hardly taste their notes. 40 to 45 degrees Fahrenheit is the best way to enjoy this kind of beer. The same goes with pale ales and stouts, which are best enjoyed at around 50 degrees.

Beer with low ABV such as light beers should be ice cold ideally, at around 35 degrees Fahrenheit.

How Long Should You Keep Beer in the Freezer?

To go from that dreaded room temperature to that perfect cold sip straight out of the freezer, here is an estimated timeline to follow. Just remember to not forget your beer in the freezer! The time is ticking until it either explodes on you or just gets slushy and undrinkable.

If your freezer is set to zero degrees Celsius/32 degrees Fahrenheit, then your light beer at around 5 percent will be appropriately chilled in around an hour and a half.

If you need your beer cold even faster, wrap a wet paper towel around the bottle or can. This will bring the time down to about 15 minutes to a half-hour.

For different styles of beer, the easiest way to know when it’s cold enough for your liking is simply by touching the bottle or can. Trust your senses! Keep in mind you don’t want your stout beer as cold as your Budweiser.

What Happens If My Beer Does Freeze?

Yes, you can thaw a beer out if it has been frozen, but if you drink it you’ll find it flat and not as flavorful as it should be.

Therefore, this beer should be enjoyed in other ways after being thawed. You can use it in recipes that require beer as an ingredient when cooking, or as an ingredient in another drink such as a beer margarita.

If you find yourself in that situation where you need room temperature beer cold fast, don’t fret. You can get whatever beer you bought cold enough to be enjoyed just by leaving them in the freezer for the right amount of time. Just set an alarm on your phone and chill out along with your beer.