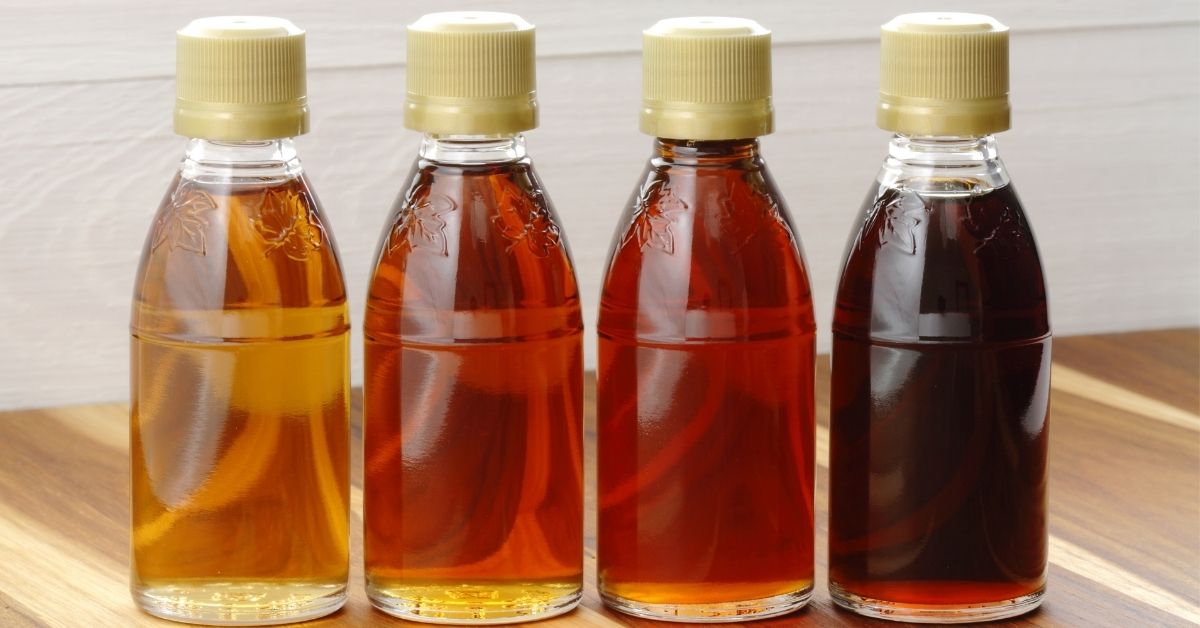 If you’ve run out of maple syrup, don’t fret or vow to move to Canada where surely pure maple syrup runs like water from a tap. There are some wonderful maple syrup alternatives that might be readily available in your pantry. Or, perhaps, you’re just looking for a cheaper alternative. Either way, I’ve got you covered.

There are some excellent alternatives for real maple syrup for those who can’t go without that sweet taste on their waffles, pancakes, bacon, or pretty much everything (if you’re me). I’ve got seven substitutes listed for you below, including one with my favorite recipe.

But if you’re curious like me and are wondering what exactly maple syrup is and why it’s so expensive, I’ve got some quick insight for you. Plus, at the end, I compare maple syrup vs. gold vs. crude oil prices because I heard about The Great Maple Syrup Heist and wanted to know why it was worth stealing!

What Is Maple Syrup?

Maple syrup is a natural sweetener, which basically means it’s sugar that comes from good ol’ nature. In this case, the delicious syrup comes from the sap of maple trees. Specifically, it can be found in red maple, sugar maple, or black maple trees.

Sap is a fluid found in plants that contains food and plant waste materials, nitrogenous compounds, and inorganic salts. First, minerals dissolve in the soil, and xylem sap carries these nutrients from the roots of the tree to its leaves, storing them as starch in their roots and trunk. Along the way, water is lost through transpiration in late winter, leaving behind that delectable sugary sap we know and love.

But how do you get that sweet, sweet sap out of that tree?

How Is Maple Syrup Made?

The sap of the maple tree is collected by drilling a hole into the trunk, then setting a container below to catch the sap. But you don’t eat it yet! The sap must first be boiled until the water inside evaporates. What’s left behind is a thick syrup, which is then filtered to remove any impurities.

Why Is Maple Syrup So Expensive?

Given the distillation process, it takes forty gallons of sap just to yield one gallon’s worth of maple syrup. There are only so many trees in the world, even in the vast wilderness of eastern Canada. That’s a lot of harvesting and production, which comes at a price.

Then there’s the different classifications of maple syrup, depending on when the sap is harvested in the season.

Given the thorough and finite process for creating maple syrup, it makes sense that it would wind up being pretty expensive. And when something a lot of people love is expensive, there is bound to be a cheaper alternative.

I went down the rabbit hole on maple syrup prices compared to gold and oil prices at the end of this article. It’s actually super interesting! Did you know the most valuable heist in Canada was a syrup heist, not valuable jewels or art?!

I’ll tell you more about it after you choose a maple syrup substitute.

Boasting a similar consistency and resemblance with its brown color, imitation maple syrup (a.k.a. pancake syrup) is often bought instead due to its far cheaper price.

For one, there is about 5 percent maple syrup in pancake syrup, if at all, with the rest made up of high fructose corn syrup. Liquid sweeteners like corn syrup are far cheaper to make than the tree extraction method of maple syrup.

Alright, so, what’s considered the best maple syrup substitute? Well, you actually have several great options to choose from. We’ll start with the most popular but then they’re not listed in any particular order.

I finish the list off with my favorite syrup substitute, including a recipe for it.

By the way, it’s important to note that these are the best substitutes for maple syrup for flavor and texture, not as better health alternatives. Maple syrup itself has many health benefits if eaten in moderation.

With a similar texture to maple syrup, honey makes an excellent substitute if not the best. It’s versatile and can take the place of both Grade A and Grade B syrup and be used for both pouring on pancakes and baking.

Even though honey provides a different flavor, honey is a great substitute due to its lack of preservatives compared to some other alternatives. Like maple syrup, raw honey can be kept at room temperature and still go unspoiled for many years (and in the case of maple syrup, indefinitely if unopened). So stock your pantry with it and forget about it until you need it.

As for how much honey to use in proportion to maple syrup, it’s about equal, though use a tad bit more honey to be on the sweet safe side.

Anyone ever tell you you’re as sweet as molasses? If they’re a cannibal, run. If they’re not, congrats, you’re being compared to a very good maple syrup substitute.

But what is molasses? It’s a dark brown sweetener created by boiling refined sugar or sugar beets, resulting in a sweet, slightly smoky final product. There are two kinds – light molasses and dark molasses.

The dark version can taste a bit overwhelming, so the light version’s flavor is more recommended for pouring over your food. Use a 1 to 1 ratio to maple syrup. Easy enough!

With its caramel flavor, pouring corn syrup straight up with a 1 to 1 ratio is a good substitute as well. Corn syrup is made by processing corn starch, so just think of it as pouring liquified refined sugar on your food.

It’s not as sweet as maple syrup, but no matter – it’s cheap enough where you can overindulge a bit with the pouring. But keep in mind that it’s certainly not the healthiest alternative.

While agave syrup has some unique flavors and consistencies compared to maple syrup, its sweetness level makes it a great alternative. Like many of the others, use one cup of agave syrup for every cup of maple syrup and enjoy this flowery substitute.

While usually used as a drink sweetener, brown rice syrup has a similar texture to maple syrup with a nutty flavor resembling honey.

White sugar isn’t as sweet as maple syrup, but it is sugar after all. So, it does make a great substitute. You can use a cup of white sugar syrup for every 2/3 cup of maple syrup.

You can simply simmer equal parts white sugar and water in a saucepan until the sugar dissolves. But brown sugar contains molasses so its flavor is a bit richer, which is why I recommend using brown sugar syrup if you can…

Perhaps the best substitute for maple syrup, it is just as delicious poured on pancakes or cooked into baked goods. The caveat – you have to cook it yourself. Good thing there’s an easy recipe right here! And with its sweet flavor, it’s worth the effort.

You can store any leftovers you have in the fridge. It’ll last about a month!

Is Maple Syrup Better Than Sugar?

Whether it’s maple syrup or a cup of honey, sugar is still sugar, sugar. Two-thirds of all cups of maple syrup contain 60 grams of sucrose, otherwise known as table sugar. And while about 24 antioxidants have been found in maple syrup, they are there in pretty small quantities. So in terms of your health benefits, it’s still unhealthy.

And if you’re watching your sugar levels, maple syrup is still safer than intaking a cup of sugar. Maple syrup has a glycemic index of 54, while white sugar is around 65. This means your blood sugar will rise slower when consuming maple syrup over alternative unnatural sugar.

For a healthier option, try using coconut oil, but you’re probably not here reading all this about maple syrup because calories matter most. In terms of sweetness, any of the above options are great options if you find yourself out of maple syrup, or are tired of always paying so much for it.

Speaking of which, I promised to tell you more about how valuable syrup is and why it was worth stealing in a grand heist!

Not by a long shot. Gold is still far more valuable than maple syrup (see calculations below). However, maple syrup is worth significantly more than crude oil. So much so that it was worth stealing in the biggest heist in Canadian history…

Over several months in 2011 and 2012, a large-scale criminal operation stole 6 million gallons of syrup worth $18 million! That Great Canadian Maple Syrup Heist is the most valuable in Canadian history. Syrup reserves are even held in Fort-Knox style facilities, but it still doesn’t mean it’s worth more than gold.

Let’s do some math to see.

As I write this, the price of gold per ounce is $1,840 and the most recent average price per gallon of maple syrup in the U.S. is just about $38. Now, there’s a difference between fluid ounces and weight ounces which is super confusing, so let’s just calculate with weight…

Maple syrup is not more expensive than gold, but what about oil?

Yep, by a lot! The recent average of Brent crude oil price is about $74 per barrel, which is only $1.76 per gallon. As we covered, maple syrup averages about $38 per gallon. That’s more than 21x more valuable than crude oil!