Shoyu vs Soy Sauce vs Tamari: What is the Difference? 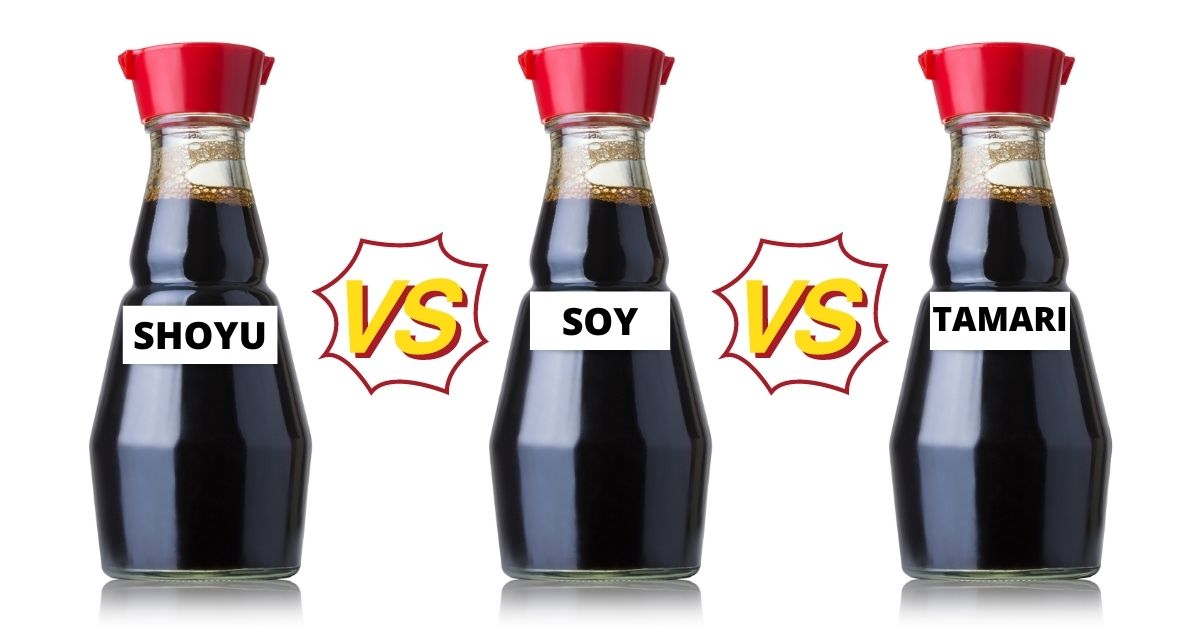 Perhaps you fancy cooking a recipe that calls for shoyu. You think, would soy sauce work instead? You have that bottle of soy sauce in the pantry ready to go, or maybe even a spare packet of it from that last time you ordered ramen.

Or maybe you find yourself at the supermarket, gazing blankly at the shelf at bottles identified as shoyu and soy sauce. What are the differences between these portions of liquid gold? How do they compare? What does each taste like, and where did they come from?

Well then, let me shoyu…ahem…show you.

First, What is Soy Sauce Exactly?

If you’re like me, your whole life you have poured traditional soy sauces over sushi, rice, and everything that seemed to make sense at the time. But never really thought about its origins or what gives it that salty taste and rich flavor.

Natural soy sauce is made with fermented soybeans to be used as a dipping sauce or in Asian cooking. It was invented about 2,000 years ago. The process to make it actually doesn’t differ very much from how it’s made today, containing most of the same main ingredients.

Don’t Be Coy, Boss, with the Soy Sauce. Tell Us How It’s Made.

Great, that’s why I’m here. The basic ingredients in the world of soy sauce are of course soybeans, then salt, wheat, and a fermenting agent.

First, the wheat is roasted and then mixed together with whole soybeans. This next part might sound gross on paper, but remember, bacteria actually save our lives every day within our own bodies…

That being said, Aspergillus mold or koji, which is the kind of mold used to make sake and miso paste, is used to inoculate that soybean and wheat mixture. What do I mean by inoculating? Inoculating is kickstarting the production of antibodies by implanting a pathogen or antigen into a living organism.

This mixture is called “moromi.” The mold and its active contents do their thing with the mixture for about 3 to 4 days. Then, water and salt are added to thicken up this mash. In the case of the Kikkoman soy sauce brand, the moromi is actually left out for several months. This can bring out more aroma and flavor.

Now comes the time for the fermentation process. To achieve this, this mash of soybeans that are moldy and wheaty is placed into large vats, typically for around 18 months or more. It will liquefy over time, and when ready, is strained into bottles and sold to you to enjoy.

In the case of Kikkoman, they take the moromi and press it slowly to filter out the raw soy sauce and then pasteurize it. They claim this process helps its sauce attain over 300 flavor profiles, including fruit, coffee, even whisky!

This makes sense since the fermentation period with the wheat starches breaking down to sugar actually produces a tiny amount of alcohol in the soy sauce. (Under 2 percent… so stick with beer or sake if you’re looking for that!)

What’s the Difference between Shoyu vs Soy Sauce?

Shoyu is, however, the most popular sauce in the Land of the Rising Sun. Instead of adding table salt to meals, they use natural shoyu with its savory umami flavor.

Great question. Japanese shoyu sauce is made from four ingredients – water, wheat, salt, and soybeans. But the Japanese form of soy sauce isn’t so simple. Even shoyu has a number of different varieties.

For example, koikuchi shoyu is the most common. Koikuchi is the Japanese word for “dark mouth,” referring to that deep black and strong, unforgettable umami flavor.

In Japanese cuisine, koikuchi soy sauce is used for all-purpose Japanese cooking and sauce for which to dip Japanese dishes. About 80 percent of all soy sauce is this kind, so if you know anything about the condiment, this is probably the kind you encountered and the taste you imagine.

Another type of shoyu is “usukuchi,” which translates to “pale mouth.” Saltier in taste and with a lighter color, usukuchi isn’t typically used for dipping, but only in recipes that call for it.

Recipes use usukuchi shoyu when they don’t want the color of the dish to change at all. The color would otherwise change if they used a soy sauce with a darker color.

Usukuchi shoyu has similar use and purpose as shiro shoyu, which translates to “white soy sauce.” Shiro is made mainly from wheat and has a short fermentation period, resulting in a pale color.

Due to its milder flavor and less sodium, it’s also used for cooking and not dipping.

Speaking of dipping, this next shoyu is ideal when dipping sashimi due to its sweet flavor, translating to “re-brewed.” This is because saishikomi shoyu is fermented twice, resulting in a sweet and thicker sauce than the other Japanese-style soy sauces.

It’s also the darkest color of all shoyu. This is achieved by removing the brine and water during that critical second stage of fermentation.

I’ve Also Seen Tamari in the Store. What’s That?

If you ever found yourself singing in your best orphan Annie impression “Tamari, tamari, I love ya, tamari!” then this is for you.

Tamari is traditionally made without any wheat. It’s first made as a by-product of soybean miso, which is a soybean paste made by fermenting soybeans and mixing it with barley or rice malt. The Aichi Prefecture in the central-western part of Japan popularized miso soup.

The story goes that the first Shogun, Ieyasu Tokugawa, in the Edo period between 1590 and 1868, needed to feed the carpenters working away building the Nagoya castle. Miso soup was the source of strength the builders needed to complete the castle. Thus, culturally, miso became an important ingredient to the region and Japan at large.

Then later on, while making this miso, the value of the raw liquid seeping out the cedar vats during fermentation was discovered, and tamari shoyu was born. The actual translation of tamari is “puddle,” named so because the tamari sauce would pool on top of the miso.

Like kaikuchi shoyu, tamari is one of the most versatile shoyu of all the different styles. It’s thicker in texture and has a less salty taste and a more balanced flavor than regular soy sauce. You can use it to dip sashimi and for all-purpose cooking, including sauteing teriyaki.

As use of tamari spread overseas, many people confused it with shoyu, believing them the same. The food industry businessman George Ohsawa introduced shoyu to the western world but made the mistake of labeling natural soy sauce as Tamari sauce.

It took a couple of decades and combined marketing efforts to properly differentiate authentic Tamari sauce that contained little to no wheat from natural soy sauce.

No Wheat In Tamari? Is Tamari Gluten-Free, Then?

If “wheat” makes you feel icky, then tamari might be a great option for you instead of soy sauce. However, there still might be a tiny amount of wheat in some tamari recipes, so if you’re intolerant of this essential ingredient, be careful.

(In a related note, don’t buy shoyu or tamari if the ingredients include a lot of unrecognizable chemicals. Sometimes manufacturers substitute these kinds of chemicals to bypass the essential fermentation process. No thanks!)

Don’t worry though, because there exists some true gluten-free soy sauce. Kikkoman makes this gluten-free alternative to regular soy sauce by switching out wheat for spirit vinegar instead.

And gluten-free shoyu isn’t just for those with gluten intolerance. If you are against even a small amount of alcohol, this alternative has none. Without wheat to break down into sugar, there is nothing that can break down into alcohol.

So with the exception of tamari and gluten-free soy sauce, all of the above kinds of shoyu soy sauces are proportioned about 50/50 with soy and wheat. These proportions result in a sweeter flavor compared to Chinese soy sauce.

Wait, There are Chinese-Style Soy Sauces Too?

Chinese cuisine has developed its own versions of soy sauce to be used in Chinese recipes.

What’s the Difference Between Japanese and Chinese Soy Sauce?

As I said earlier, shoyu are 50/50 soy and wheat. The Chinese version, invented in the 2nd century A.D., is traditionally one hundred percent made with soy. Since it’s the wheat that results in a sweeter flavor, Chinese soy sauce is known to have a saltier and more intense bitter flavor.

Are There Different Kinds of Chinese Soy Sauce?

Yes. Like the Jedi in “Star Wars,” Chinese soy sauce has a light side and a dark side.

Like the darker Japanese shoyu sauces, dark Chinese soy sauce is sweeter and thicker. Caramel coloring is typically added to give it this dark color.

But just because this soy sauce is dark, that doesn’t mean it has higher salt content.

Chinese light soy sauce is typically saltier, and used in Cantonese-style Chinese cooking where you don’t want to make the result darker in color.

Stir-frying vegetables and marinating fish are some examples where you don’t want the dish doused in black sauce. The light sauce is also used for dipping wontons and spring rolls.

So Much Talk of Salty. What About Low Sodium Soy Sauce?

Low sodium soy sauce is popular for people watching their sodium intake, and is popular enough to be widely available to buy.

It is made by removing the salt after the fermentation process. This way, there’s a reduction of around a third of sodium but the natural taste and deeper color of shoyu is retained.

Do Any Other Cultures Make Their Own Type Of Soy Sauce?

The result is almost like syrup, so sure, I would pour it on everything. Why not? Maybe not pancakes, but in noodle dishes and stir fry for sure.

It’s also known as “sweet soy sauce.” So if you prefer the sweet taste of soy sauce over the salty, umami taste, this version is for you when dipping food. It has been described as having a consistency of barbecue sauce and makes a fantastic marinade.

Thank you for letting me shoyu the ropes. Sorry, couldn’t resist.

Now that you know the differences and uses of various kinds of soy sauce and shoyu, you’re hopefully more curious to try a new variation on the traditional sauce. And maybe even a new recipe that features them! Marinate, dip, or fry – it’s all delicious.

Because in the battle between soy sauce and tamari and kecap manis and shoyu, Chinese and Japanese and Southeast Asian, everyone wins.