Marinara vs. Spaghetti Sauce: What is the Difference? 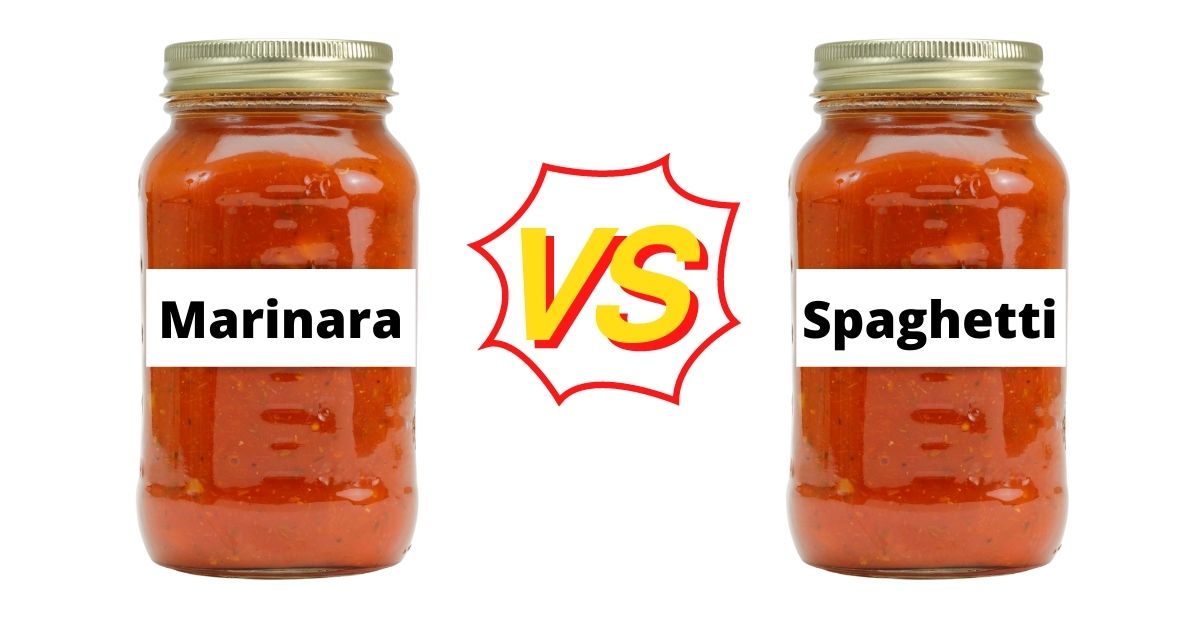 Marinara and spaghetti sauce are two of the most popular sauces on the planet. They’re flavorful, delicious, and versatile! They can be used in many dishes and made ahead which helps simplify those busy weeknight dinners.

Most times, these sauces are used in pasta dishes. But there are many other uses for these sauces, in Italian cuisine as well as others.

As popular as these two sauces are, many people don’t know the difference between marinara and spaghetti sauce. So we tackled that question for them!

What is Marinara Sauce?

Marinara sauce was first invented in the late 1600s by an Italian chef named Antonio Latini. The recipe was first published in his two-volume cookbook, sometime between 1692-1694.

In Italy, this delicious red sauce is a smooth tomato sauce made from a mixture of its essential ingredient, tomatoes, and onions, garlic, and fresh herbs. Some regions of Italy will mix in olives, capers, spices, and even a little wine, changing up this traditional tomato sauce. It’s used to top plain pasta, most commonly vermicelli or spaghetti, and mixed with fish.

What About in Other Regions?

Marinara is popular in other countries, too, such as New Zealand, Australia, Spain, and South Africa, but used in different ways. It is oftentimes mixed with seafood in these places. In Italy, that same dish would be referred to as Alla Pescatore.

In the United States, marinara sauce is usually a very simple sauce. It is usually touted as, and used in, vegetarian dishes because it contains no meat.

It is primarily mixed with olive oil and a little Parmesan cheese. A traditional marinara sauce usually has a thinner consistency and is featured on the children’s menu since it has a plainer flavor profile than other sauces that feature strong Italian seasoning.

In addition, some prefer marinara sauce in America because it does not contain meat or seafood and can feel like a lighter meal. The marinara sauce found in the United States is also a thicker sauce than other marinara sauces found on other parts of the planet. In other countries, you can expect it to have a thinner texture.

What is Spaghetti Sauce?

Spaghetti sauce is one of those tricky terms because it can serve as a blanket term for a variety of sauces. Let’s break that down for a second.

However, most people have a very specific sauce type in mind when comparing it to marinara sauce.

When most people think about spaghetti sauce, they often think about a savory sauce made from fresh tomatoes and tomato paste, that has a thicker consistency in terms of texture.

Both marinara and typical spaghetti sauce have tomato as a base ingredient. However, spaghetti sauce tends to have a thicker consistency and is usually a meat sauce that contains ground beef, ground turkey, sausage, or some other meat product. In fact, the introduction of meat into the sauce is the big difference between these sauces in America.

Many sauces also include cheese or have an addition of bay leaves for added flavor. There is no single spaghetti sauce recipe, and the key differences can take a good sauce to great. (Just ask anyone with a favorite Italian restaurant sauce, or family member that creates their favorite savory dish!)

How They Differ in Flavor

Neither sauce can take credit for having the most flavor since it all depends on how they are made, and with what ingredients. If one uses fresh garlic and basil, then it may be more flavorful than one made with dry seasonings.

It also depends on your individual tastes.

Marinara sauce usually consists of a more mild-mannered body and flavor. It is also usually a thinner sauce than spaghetti sauce. Especially when spaghetti sauce is mixed with meat (in America).

How the Sauces are Prepared

When preparing a sauce for dinner, there is one that is much quicker to make than the other. However, you may be missing out on developing a flavor profile using key ingredients by skipping this step.

Preparing marinara sauce is quicker than spaghetti sauce. With this kind of sauce, you do not start sauteing the onions, garlic, and ground meat like you would with the other. Instead, this quick prepping process starts with boiling the sauce and then adding it to pasta of your choice.

Spaghetti sauce, on the other hand, is a longer process. You start by sauteing your onions and garlic, which helps develop a rich flavor. Once the onions are transparent and the garlic becomes aromatic, you add the meat and extra ingredients the recipe may call for.

Tomato sauce is the simplest form of pasta sauce that you can find. Marinara sauce is one type of tomato sauce. It is basically pureed tomatoes (or a combination of tomato sauce and paste), seasoned with Italian seasonings, salt, pepper, and any fresh herbs you want to add.

Can You Substitute Marinara Sauce for Spaghetti Sauce?

The good news is that you can do whatever you want! If you love the flavor of homemade marinara sauce (or store-bought – we won’t tell!), or only have that on hand, then feel free to substitute it for spaghetti sauce.

Many people also use marinara sauce as a pizza sauce. They spread it on pizza dough, add their toppings, and voila! Homemade pizza made simple. Spaghetti sauce could do the trick too, just expect it to be thicker.