Malt Beverage vs Beer: What is the Difference? 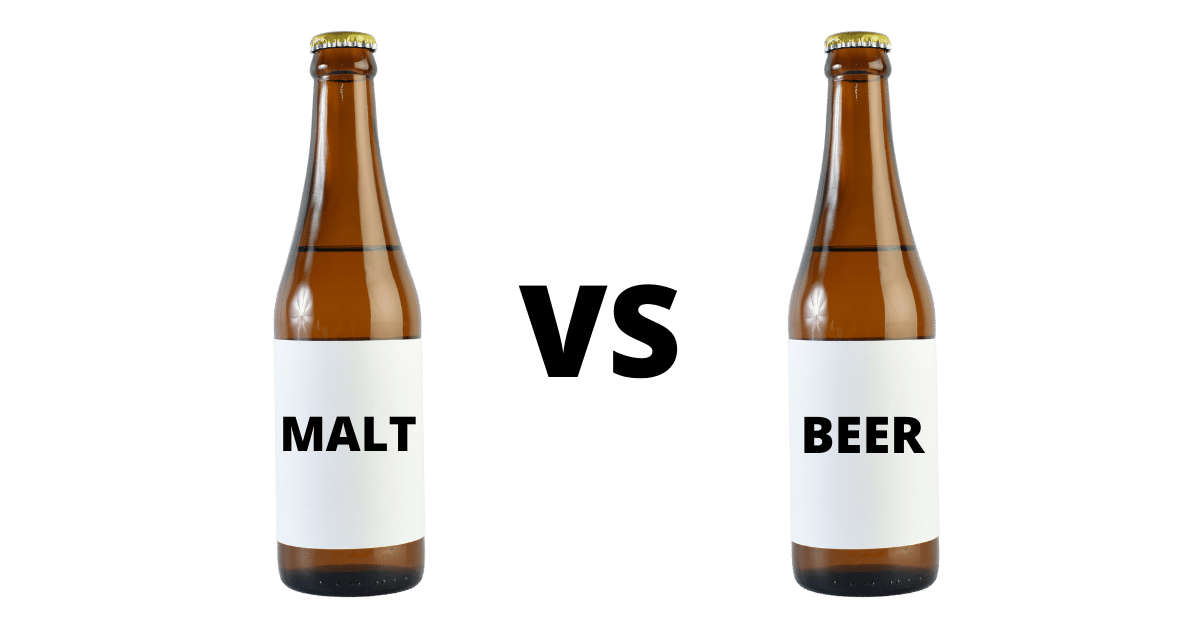 When you hear the word malt, you might think of either two things: a milkshake or an alcoholic drink. And if you’re like most people, you have no clue what makes something malted and why.

For example, ever wonder why malted chocolate is called that? I’ve always just drunk it and never thought twice.

So let’s end that wondering right here and explore the term malt beverage. For instance, is there a huge difference between malt liquor brands and kinds of beer?

Well, call me Malt Disney because I’m about to bring you on a magic storybook ride…except instead of Dumbo this journey will be about mostly alcoholic beverages.

What’s the Definition of Malt?

“Malted” means taking barley or other kinds of cereal grains and making them ready for brewing or distilling by drying, germinating, or steeping them. The process involves soaking the grain in water, allowing for it to germinate just enough to not spoil before drying it with hot air.

Then that malted grain is ground up into a coarse meal called “sweet meal.”

So in the case of malted chocolate, it’s made by drying a grain such as barley and mixing it with wheat flour and powdered milk. It’s the malt that gives the popular drink that buttery, savory, sweet taste.

Oh, so to “Malt” Doesn’t Necessarily Result in Any Amount of Alcohol?

The word “malt” often gets a bad rap for being associated with that cheap bottle of malt liquor. But base malt product is just a beginning ingredient to then make a number of different kinds of products.

The malt base can be mixed with fruit, yogurt, milk, and more. It can even be an ingredient in making bread or pastries.

Including malt in a product even provides numerous health benefits. High in protein, malt is rich in vitamins, starch, and minerals. This means malt’s restorative, strengthening properties benefit children, the elderly, and those recovering from illness, providing energy for mental and physical activity.

Then What’s a Malt Beverage?

While “malt beverage” could technically mean non-alcoholic based on the context above, the United States Tax and Trade Bureau defines otherwise:

So according to this bureau’s internal revenue code, a malted barley grain as the main ingredient before being processed into a fermented drink is legally considered a malt beverage. The Federal Alcohol Administration Act specifically outlines that a malt beverage consists of a base that is 25% malt and contains at least 7.5 pounds of hops per 100 barrels of finished product.

What Does That All Even Mean? Speak English!

Wow. Very confrontational. You could at least say please.

Thank you. Once a grain is malted, it can now be used in the brewing process to be turned into a final alcohol product.

How is this done exactly? Through the fermentation process. This is a biological process where a brewer’s yeast converts fermentable sugars such as glucose and fructose into ethanol, carbon dioxide and heat. This process adds to the chemicals of the natural flavors of whatever is fermenting.

The result of this chemical process of the yeast, mold, or bacteria interacting with the sugars without the presence of oxygen is alcoholic beverages. I never thought I would be so grateful for bacteria.

Is All Alcohol Made With Malt, Including Regular Beer?

Most types of beers are actually made with malt as a primary ingredient, and are considered “malt beverages.”

Even gluten-free beers, which don’t contain malted barley, but rather molasses or sorghum are still considered a malt beverage under this law.

What is Malt Liquor?

Brands of malt liquor you may recognize are Olde English, King Cobra and Colt 45, perhaps seeing them in convenience stores in 40-ounce bottles.

How is this achieved? Malt liquor is made with the bottom fermentation process, which refers to the yeast falling to the bottom of the wort, collecting there.

How About Malt Liquor Vs Beer?

Lager beers are brewed with bottom fermentation while ale is top-fermented.

As a result of their key differences through fermentation, beer has a bitter taste compared to the sweeter, spicier malt liquor. And since malt liquor generally has more inexpensive ingredients, it is cheaper than beer. That’s true even though the modern beer is sold in smaller 12 ounce portions with a lower alcohol content.

What are Flavored Malt Beverages?

Through the addition of spices to a malt base, flavor malt beverages have taken the market by storm with a different flavor profile. Four Loko, Mike’s Hard Lemonade, and Redd’s Ale are popular examples of FMBs.

These brands maintain a level of less alcohol to stay under a certain tax bracket. To be legally considered a malt-based beverage, 51 percent of the alcoholic content of the final product must be from that malt base. Beer has a similar line not to cross to risk higher taxation – if over 6 percent ABV, less than 1.5 percent must be alcohol from other sources not from malt.

In case you were wondering, hard seltzers like White Claw are legally considered FMBs, even though they are brewed with a fermented sugar base, not malt base.

Conclusion – It’s All Your Malt

So hopefully you learned a little something about how beer is made and how malt liquor and its trending cousin the flavored malt beverage are different and similar.

Now that you understand what goes behind each process to produce them, each sip will hopefully be richer with your newfound wisdom. The bitterness, the sweetness, the hoppiness – it’s all there because someone figured out the method to make different kinds of drinks using natural ingredients. And someone else carries on that tradition today.

So cheers to malt!