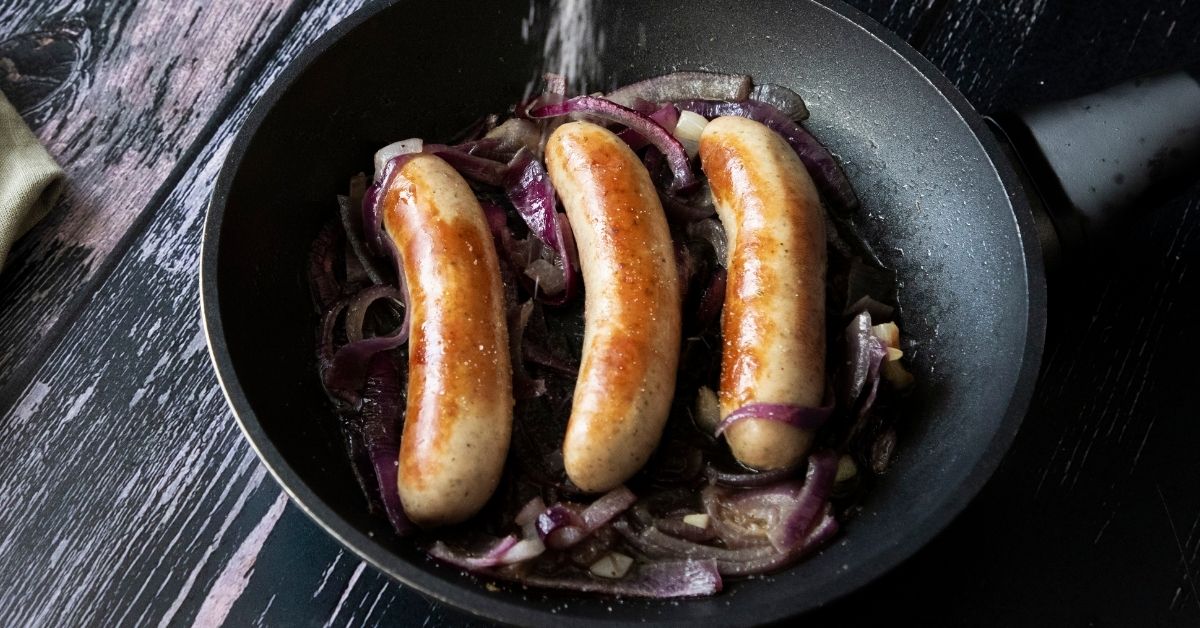 How many different methods are there to cook a brat? It sounds like the start of a bad joke.

But there are many different ways you can cook them. Many people throw them on the grill, while others use air fryer recipes. Some even boil brats. While there is no one best method, you will get different flavors from each cooking method.

While grilling a bratwurst is a great way to get a tasty and delicious dish, some people think that the best way to cook a bratwurst is by frying it!

Why Should I Fry Bratwurst?

When you pan-fry a bratwurst you might not get the same smoky flavor as a grill. But there is something even better: caramelization! You cannot get that sweet, deep flavor of nuttiness from the grill or oven.

Pan-frying a bratwurst cooks your sausage to a rich, golden brown. Plus, it gives you a juicy bratwurst with legendary flavor!

The best part is, it is not hard to do! In fact, it may be one of the easiest things you can make in the kitchen.

The following guide walks you through how to fry a bratwurst. As a bonus, I provide you with a simple recipe to elevate it to a whole new level!

What is a Bratwurst?

Bratwurst, sometimes called brat for short, is a German sausage made from beef, veal, or pork. It is a specific type of link sausage that originated in Germany. So don’t confuse it with the ever-popular American favorite, hot dogs. They are not the same.

This special sausage was originally brought to America by German immigrants and quickly became a BBQ staple.

Many people love to grill up a brat with sausage and onions, then throw it into a bun and serve it with an ice-cold beer.

Bratwurst is also an excellent dinner choice for those on a low-carb diet. It is the easiest way to get a high protein, low carb entree into your day.

How to Fry Bratwurst in 3 Easy Steps

Just like a mouth-watering steak, bratwurst needs to be seared at relatively high heat. Then you finish cooking it as described below until it reaches the proper internal temp.

Whether you get an uncooked brat from your town’s butcher, or pick up Johnsonville brats at the local grocery store, giving the meat a sear will provide that golden brown caramelization with a hint of sweetness.

Once you have seared the sausage and it is brown and aromatic, you will turn the heat down, cover the meat and let it cook until it is done. Here are the details…

For best results, use butter to pan fry your bratwursts. Butter adds flavor to any dish, and sausage is no exception! In fact, butter is one of the secrets for excellent tasting brats.

Some people substitute vegetable oil or olive oil for their butter. This is an easy way to switch from a high saturated fat to a low one if you need to for dietary reasons. But oils will not provide the same taste that butter will.

Preheat a large skillet or cast iron pan over medium-high heat. Add one or two tablespoons of butter (or a little oil if you are substituting). Let the butter melt until it starts to turn a light brown color.

Place the raw brats in your skillet in a single layer. Sear the bratwursts for approximately three minutes per side, until you can see a deep, golden brown color.

Once you are done searing both sides of the sausages, flip the meat one more time. Then turn the burner down to medium heat or medium-low heat, depending on how hot your stove cooks.

Cover your brats and continue to cook for five more minutes. Then flip the meat and cook for an additional two to three minutes.

Covering your brats after the sear is an important step. That is because the steam inside the pan can help retain the bratwursts’ moisture, providing you with a juicy sausage.

It can also help your brats cook faster, saving you cook time.

Cooking time will vary depending on the thickness of the brats. The brats are considered fully cooked when the meat thermometer reaches an internal temp of 160 degrees.

Let the meat rest for five minutes so that it can retain its moisture. Or, if you’re like me and can’t wait, dig in! They are sure to be juicy either way.

Are you looking for a little more advanced way of cooking your brats? Here are 2 recipes that any brat-lover will enjoy, and any cook can make.

Do like the Germans do, and cook up your brat with onion slices and a malty beer to add some flavor. This simple recipe can take your tasty brat to an elevated level without adding a lot of work.

Try this simple recipe that can elevate your dish to give you the best brats around!

Preheat your pan over medium-high heat. Add the butter, letting it melt, and turn slightly brown.

Using a large cast iron skillet to fry your meat can add a depth of flavor that other pans cannot. It also fortifies your food with iron and can provide an even cook by retaining and distributing heat efficiently.

Sear your sausage for approximately three minutes per side. Look for a deep, golden brown color on both sides.

Be careful to keep your pan at medium-high heat to prevent premature browning.

Add the sliced onions and beer. Turn the heat up and bring the mixture to a boil.

Once the mixture is boiling, reduce the heat and continue cooking. Flip the sausages and stir the onions.

Continue to cook uncovered, allowing the liquid to cook down. As it reduces, the flavor will intensify.

Remove the brats from the heat and serve hot.

You can also enjoy it on a french roll or bun, piling the onions in between two layers of sausage.

Bacon makes everything better. This recipe is a perfect Super Bowl Sunday appetizer or really, for any gathering where people like meat! I like to think of it as an upgraded version of bacon-wrapped Lit’l Smokies.

6 slices of bacon, cut in half

Use a fork to poke the bratwurst several times, and put them in a pan with the beer. Bring it to a boil over medium-high heat, then reduce heat to a medium and simmer for 15 minutes.

Line a baking sheet with foil and put a wire rack on top.

Mix the brown sugar with the cayenne pepper in a big bowl and set aside.

Cut each bratwurst into thirds, wrap each piece in a half slice of bacon, and hold it together with a toothpick.

Toss each wrapped bratwurst into the cayenne pepper-brown sugar mix and coat it. Then space them out on the wire rack.

For some more great meet cooking methods and recipes, check out these related articles: