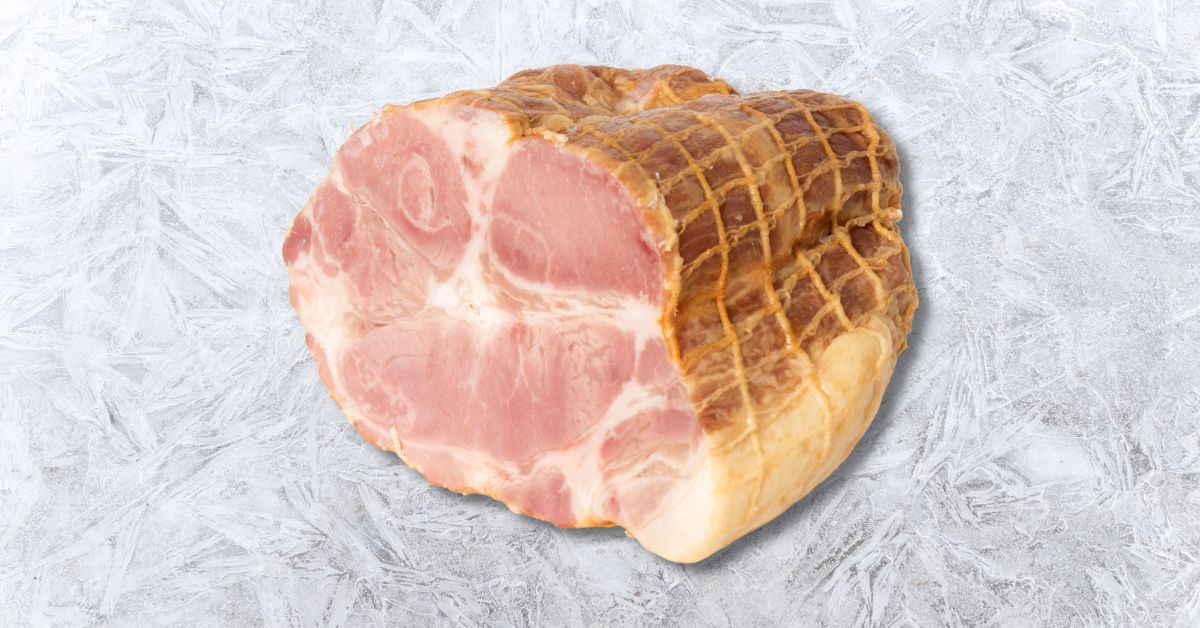 Ham is a forgiving meat to cook and reheat! If you freeze it correctly, you can enjoy ham leftovers for weeks to come.

How you freeze ham depends on the type of ham you’re freezing. Some ham lasts longer in the freezer than others. So, I’m going to answer your question on how to freeze ham as well as other frequently asked question:

Whether you want to freeze a whole ham or leftovers from your holiday feast, you will want to follow a few guidelines to ensure that your delicious meat stays safe for your family to eat later.

How Many Types of Hams Are There?

There are three types of hams: city, country, and fresh. Despite what the first two names imply, these are categorized by how they’re cured, not where they come from. City hams are the most common, especially around the holidays.

Ham is usually cut into two different types: the butt and the shank. The butt is the top portion of the ham and has more fat. That also means it is usually more decadent tasting.

The shank is leaner but usually the more flavorful cut.

Once the ham is cut, there are also several different preparations that you can choose from. They are as follows:

City Ham is the most popular and, therefore, the easiest ham to find. It is brined and almost always comes fully cooked. You can also find it in a smoked and unsmoked variety.

This type of ham is classic and used to make glazed hams. They are also used as the base for the ever-popular spiral cut hams.

A country ham, on the other hand, is aged for months in salt, not brine. Then after the long salting process, it’s smoked. The best way to enjoy country hams is on a charcuterie board with cheese rather than on a platter for a holiday dinner.

Country hams are trendy in the southern states, but can be a little more challenging to find elsewhere. Virginia ham is the most popular variety.

They have an intense flavor that is reminiscent of prosciutto.

Fresh ham is a specialty cut of meat. It is uncooked and uncured and usually comes with the skin on. When cooked, this ham preparation often tastes like a tender pork roast with crispy skin.

The short answer is that ham freezes very well. However, that not all ham is created equal. Higher-quality ham will freeze better than some cheaper versions that may contain added water or other ingredients.

You should also know that different types of ham freeze differently. Some should be thawed for consumption earlier than others. Don’t worry; I will go into detail about that soon.

Can Cooked Ham Be Frozen for Later Use?

Yes, cooked ham can be frozen for later use as long as it was properly and promptly refrigerated beforehand. By promptly, I mean as long as it is frozen before reaching it’s refrigerated shelf life of 3-5 days or its “use by date”.

How to Freeze Ham

The answer depends on if you’re freezing whole ham, sliced ham, or bone-in ham. There are a few ways to freeze ham, and each method is best for a specific type of ham. So, here are the best ways to freeze each type of ham…

If you are trying to freeze a whole ham, follow these guidelines.

1. Use a paper towel to soak up any excess moisture the meat may have. Wrap the entire ham in freezer paper or aluminum foil.

2. Place the wrapped ham in a freezer bag or airtight container. Seal it tightly, expressing as much excess air as possible as you close the container.

3. Label the bag with the contents and date. That way, you can track the age of the frozen ham. Use the freezer guidelines from our previous section to give it an expiration date.

4. Place the container or airtight bag in the freezer to enjoy at a later date.

Another great way to approach freezing your ham is to package it in smaller portions. A smaller amount of ham, like a single-serving, means you can pull out individual parts for a ham sandwich or single meal.

1. Slice the ham to your preferred thickness, or portion out a few ham slices.

2. Once you’ve divvied up the ham to freeze, cover each portion with cling film or plastic wrap. Place each piece into a zip lock freezer bag and squeeze out as much air as possible.

Alternatively, if you have a vacuum sealer, use it to seal your ham portions.

3. Label the bag and add an easy-to-read expiration date to know when to use the meat by.

Did you know that you can easily (and safely) freeze a bone-in ham? Bone-in hams make an excellent holiday dinner because they have a rich flavor.

1. Using a paper towel, soak up the ham’s extra moisture on the outer layer. Then, wrap the entire bone-in ham in freezer paper, butcher paper, or aluminum foil.

2. Place the wrapped meat in a freezer bag if it can fit. You can also use another airtight container. Seal it as tightly as possible, squeezing out as much excess air as possible as you close the container.

3. Label the bag with the date and the contents. That way, you can track how old the frozen meat is. It is also a good idea to put an expiration date on the container so you know when the quality diminishes.

4. Place the container or airtight bag in the freezer to enjoy at a later date.

How Long Does Ham Last in the Freezer?

Depending on the type, ham can last from 1-6 months. Technically, according to the USDA, frozen foods are safe indefinitely. However, quality declines over time. The following outlines the recommended freeze time for different types of ham…

The following outlines different types of ham and the recommended time they can be frozen before losing their quality, pulled directly from the FoodSafety.gov website. This website provides data on food safety and the right way to store frozen food items for safe human consumption.

A good rule of thumb is the less time a food item is frozen, the better it will taste. Food items can lose taste after several months in the freezer. They may also get freezer burn which leaves the food tasting yucky.

Does All Ham Freeze the Same?

Not all ham freezes the same. For example, bone-in ham will freeze differently than sliced spiral-cut ham. So you want to ensure that you wrap it properly and follow the above guidelines on how long you can freeze it.

Is It Okay to Freeze Honey Baked Ham?

Honey ham is infused with a hint of sweet flavor and pre-sliced. This delicious ham can be frozen for up to 8 weeks before its quality wanes. Since this leftover cooked ham is sliced, you can easily freeze it in smaller portions since to pull out as needed.

How Long Is Ham Good For in the Fridge?

According to the USDA, Cooked ham can be kept in the fridge for about 3 to 5 days. Be sure that your refrigerator is kept at 40 degrees F or less to maintain its freshness. That temperature keeps food safe for human consumption.

How to Thaw Ham Safely

The safest way to thaw any perishable food is in the fridge. The amount of time it takes to thaw ham in the refrigerator depends on the size of the meat you are defrosting. You can safely thaw ham faster, as instructed below.

Thaw It Overnight in the Fridge

You should allow approximately 4-5 hours per pound of ham. Sometimes, it may take a couple of days to thaw.

Once the ham is thawed in the fridge, it should have a shelf life of about 2-3 days.

Thawing it in the fridge is ideal, but there are two ways to safely thaw it quickly. I’ll explain how next.

How to Thaw Ham Quickly (& Safely)

If you don’t have time to thaw frozen ham in the fridge, you can safely thaw it in the microwave. Or, by cycling it through cool water. The microwave threatens to dry out your ham, though, so be careful. Here’s how to do both properly…

If you use the microwave, place the ham in a microwave-safe dish. Then set the defrost setting for pork and type in the number of pounds. Let the microwave do the rest of the work.

Using the defrost setting should help prevent drying the ham out.

Soak It in Water

The cold water method is a great option if you don’t want to babysit your microwave. It’s a good compromise between the long hours of defrosting in the fridge and possibly drying it out in the microwave.

Can You Cook Ham From Frozen?

If you have zero time to thaw your ham, you can cook it from frozen. Just heat your oven to 325 degrees F. Usually, thawed ham takes 10 minutes per pound to cook, but if frozen, it will take much longer (about twice as long). Cook your pre-cooked ham until it reaches an internal temperature of 145 degrees F.

Is It Okay to Refreeze Ham?

Many people think that it is unsafe to refreeze ham, but that is simply not true if it has been properly stored in the fridge. If you have kept it at the proper temperature by storing it in the fridge set at 40 degrees F or less, then it is okay to refreeze ham.

The issue that you do have with refreezing food and cooking it again later is that the quality of the food goes down. Freezing food creates ice crystals that can rupture the food cells of whatever it is that you are freezing.

Then, when you thaw the meat, it can produce liquid that was not in the package prior to freezing. That means when you cook the meat after freezing it for a second time, it will be drier.

Is It Better to Freeze Ham Cooked or Uncooked?

Both cooked and uncooked ham can be frozen, and do freeze well. However, their quality will deteriorate at different rates. As such, uncooked ham is arguably better to freeze because it’s quality persists for up to 6 months compared to 1-2 months.

What Can You Make With Leftover Ham?

Ham is not only delicious, but also very versatile meat. There are a wide variety of leftover ham recipes for every meal of the day!

There are endless favorite ways that home cooks repurpose that holiday meal for their families and friends. The following are just a few recipe ideas for that leftover ham: