How to Cook Spiral Ham Without Drying It Out 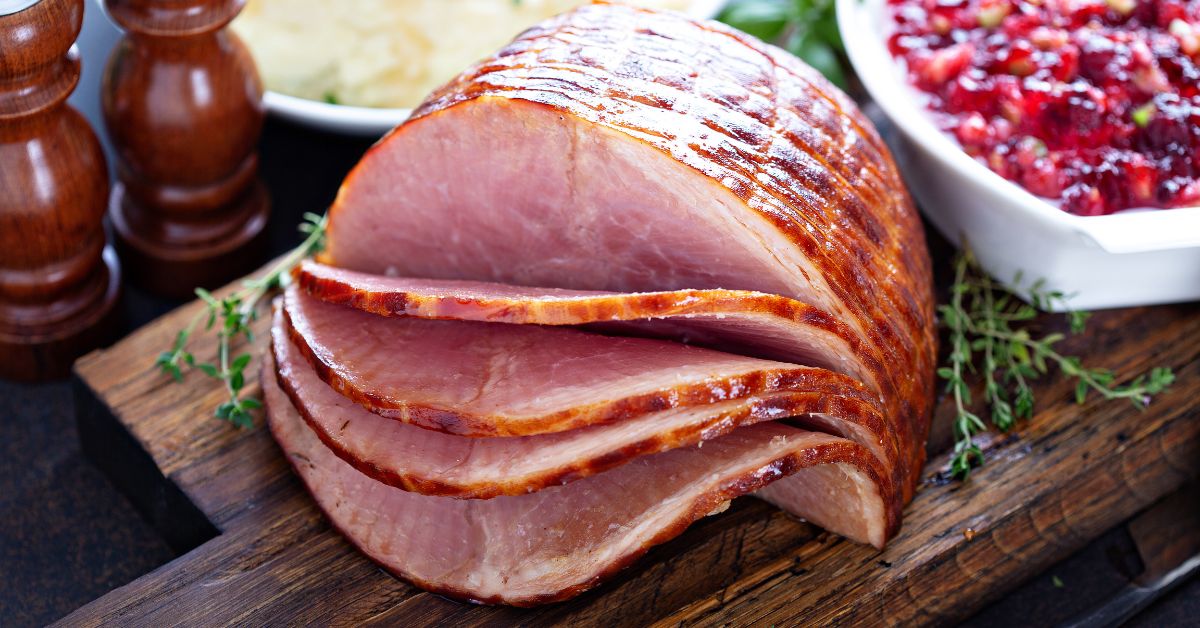 Craving a delicious juicy ham with a flavorful glaze? You’re likely entering the holiday season. Whether for Christmas dinner or Thanksgiving, nothing says “special occasions” like a good ol’ classic holiday ham.

That’s not to say a sweet honey glaze isn’t a good choice all year round.

Whether this is a holiday meal or you were inspired by a surprise grocery store sale in July, here are easy tips to help. They will ensure your spiral-sliced ham winds up a tender, perfect ham, not dry or chewy.

With the following answers to common questions, you won’t have a dry ham or dry eye in the house after tasting your delicious recipe.

What’s the difference between a spiral ham and regular ham? Both come from the back leg of a pig, but are cut differently. A spiral ham is precut by the butcher into slices. The butcher uses a machine to evenly slice all around the ham, making it easier to cook and serve.

Thus, spiral ham gets its name from the spiral cuts all around it. This pre-cutting is particularly helpful when there’s a big old ham bone in the middle of the meat to tend with.

Granted, a glazed ham can come either bone-in or as a boneless ham. If you have a choice though, go with the bone version. The meat around the bone retains better moisture as it cooks, resulting in a slightly juicier flavor in comparison.

Are All Spiral Hams Precooked?

Almost all spiral hams are pre-cooked. However, there is the rare case when it is sold partially cooked or raw. So, you should always check the product label to be sure. You certainly don’t want to slice and serve a raw or partially cooked ham.

So, if you’re looking for an easier, quicker entrée than a holiday turkey, a spiral ham is a great alternative.

What Size Spiral Ham for 10 Adults

So, for boneless, a 5-pound boneless ham will feed about 10 people. You simply multiply the number of adults by .5 to get the weight of ham you need to buy.

Why Does My Spiral Ham Come Out Dry?

Spiral-cut is a precooked ham, so you only need to reheat it. If it’s coming out dry, you’re likely warming it at too high a temperature. Since it’s not raw meat, you don’t have to cook off any bacteria at a high cooking temperature. It’s safe from the get-go.

The other possibility is you’re leaving the meat on the baking rack too long. Since the ham is pre-sliced, the inside of the meat is exposed, which means the moisture easily evaporates. If left too long, too much moisture will burn off.

That brings us to our last likely culprit for dried-out ham: too much moisture escaped. Meaning you didn’t cover the ham to hold the moisture inside.

So it’s not only the oven temp but how you prepare the ham to be placed inside the oven. It takes a bit of vigilance and a bit of a strategy to prevent all the moisture from burning off.

No matter the cooking method, you want to use the same strategy as you would if you were a tall person doing the limbo – go low and slow. I’ll explain how to do just that below.

How to Cook Spiral Ham Without Drying It Out

Low temp and foil aren’t always enough to protect the ham’s moisture. You can also add some liquid to the bottom of your shallow roasting pan underneath the ham. A cup of water, chicken broth, or orange juice will do as this liquid. As this liquid slowly evaporates, the moisture it creates will counteract any moisture burning off the meat itself.

Then every 10-15 minutes while the ham is baking, baste some of that liquid from the bottom of the pan onto the ham and inside the individual slices. If you don’t have a turkey baster, a spoon will do in a pinch.

By adding liquid and basting, you simply DON’T ALLOW the ham to dry out. It’s a pretty surefire way to get moist ham every time.

Should I Cover a Spiral Ham When Cooking?

Yes, you should cover a spiral ham when cooking. If you have a roasting pan with a lid, the fitted lid will suffice. Or, you can cover the ham with foil, sealing it completely but not too tight. This way, you can easily pull the foil away to baste the meat occasionally.

What Temperature Should I Cook My Spiral Ham?

If the meat packaging has directions, follow that temperature recommendation. If not, cook at 275 degrees F for the best ham. If you have lots of hungry people hovering and need to cook faster, you can cook as high as 325 degrees F without too much risk of drying the ham out.

How Long Do You Heat a Fully Cooked Spiral Ham?

The short answer is, until the ham’s internal temperature reaches 140 degrees F. But if you’re cooking at the low heat of 275 degrees, expect 13-16 minutes in the oven per pound. At the medium heat of a 325-degree F oven, allow about 10 minutes per pound.

If you don’t have a meat thermometer handy, this timing will be close enough to perfect eatin’.

What Is the Best Way to Cook a Spiral Ham?

Regardless of brand, you’ll likely need the following items to oven-bake your ham for the best results.

Note: A store-bought ham vacuum-sealed will last in your fridge for about a week, so try to cook it before that time.

1 – A roasting pan with a wire rack

This kind of pan allows your meat to sit on top of the wire rack above the inch or so of added liquid. This separation between the fluids on the bottom of your roasting pan keeps the meat protected from being boiled.

Cover the entire ham tightly but not too tight, sealing it completely but allowing easy access for basting later. Then place it atop the wire rack.

Note: If your roasting pan has a lid, you can use this INSTEAD of foil to trap moisture.

3 – Ingredients for a glaze

You may have your own glaze, or the ham may come with its own in a packet.

If making your own, an easy ham glaze recipe is to combine brown sugar and maple syrup in equal parts. Then add a little bit of Dijon mustard to taste.

Use this to apply the glaze to the meat for that sweet flavor at the end. Spread it around the outside of the meat and inside the slices before wrapping it in tin foil.

Cook times are only estimates. The only way to know if your ham is ready is to use a meat thermometer. Invest in an instant-read thermometer so you can check for the exact right time to remove the meat from the oven. Once the thermometer reads 140 degrees, it’s ready to be removed.

Once removed, allow the meat to rest for about 5 minutes per serving, basting one more time with the juices in the pan. This allows the moisture in the meat to redistribute properly before you do your final slicing and serving.

Don’t wait too long, though – who wants to eat this ham at room temperature?

How Long Is Leftover Spiral Ham Good For?

For many people, the best part of a ham dinner is leftovers. There are many leftover ham recipes for sandwiches and the like to prove it! Just be sure to eat it all within 3 to 5 days to avoid spoilage.

To properly store cooked ham, wrap it or seal it in an airtight container and place it in the fridge or freezer. As mentioned, it will last in the fridge for 3 to 5 days. If you have more leftovers than you can eat in 5 days, you can freeze them. (See below.)

How Long is Unopened Spiral Ham Good For?

How Long Can I Freeze a Spiral Ham?

According to the USDA, frozen foods stored continuously at 0 °F or below can be kept indefinitely. However, quality wanes over time. Thus, FoodSafety.gov suggests freezing pre-cooked, wrapped spiral ham for 1-2 months in the freezer for the best quality.

City ham vs. country ham doesn’t refer to where the pigs are raised. The different names refer to how the meat is cured. Country ham is dry-cured over a long period. City ham (the more common of the two) is wet-cured.

If you live in the United States, the most common kind of uncooked ham city ham. In case you were wondering, a city ham isn’t called this because it’s used to taking public transportation and cheering for big market sports teams.

Maybe the moniker is referencing how a city has a dense population, and this kind of ham is the mass-produced kind that can service an urban setting. Regardless of the name’s origin, it is the industry term used to describe a pre-cooked ham cured with a saltwater brine. You simply pop it in the oven to cook without much preparation. Ready to eat!

Plus, you don’t even have to cook it! Slice off a piece and enjoy it cold like a thick slab of over-the-counter deli meat. Slap some Dijon mustard on it and stick it in between bread. With all the different ways to enjoy it, it’s convenient and fitting for busy city living!

A country ham, on the other hand, is aged for months in salt, not brine. Then after the long salting process, it’s smoked. The best way to enjoy country hams is on a charcuterie board with cheese rather than on a platter for Easter dinner.

Why inject all the salt and brine and sugar into the pork? To preserve it for a longer amount of time.

Spiral cut hams are classified as city hams. When shopping for your spiral ham recipe, the type of ham you’re seeking explicitly says “glazed spiral ham” or “spiral-cut ham” on the label. It will either come pre-glazed or with a glaze packet to apply to the meat yourself while cooking.

I hope the above information has taught you how to keep a ham moist while cooking. Thankfully, it’s much easier than making the perfect Thanksgiving turkey. Although, even that isn’t too difficult if you know the basics.

So, if you’re cooking a spiral cut ham for the holidays, I wish you happy and tasty days ahead. With such simple ingredients and only a little bit of attention, dinnertime with those you love just got a little merrier.