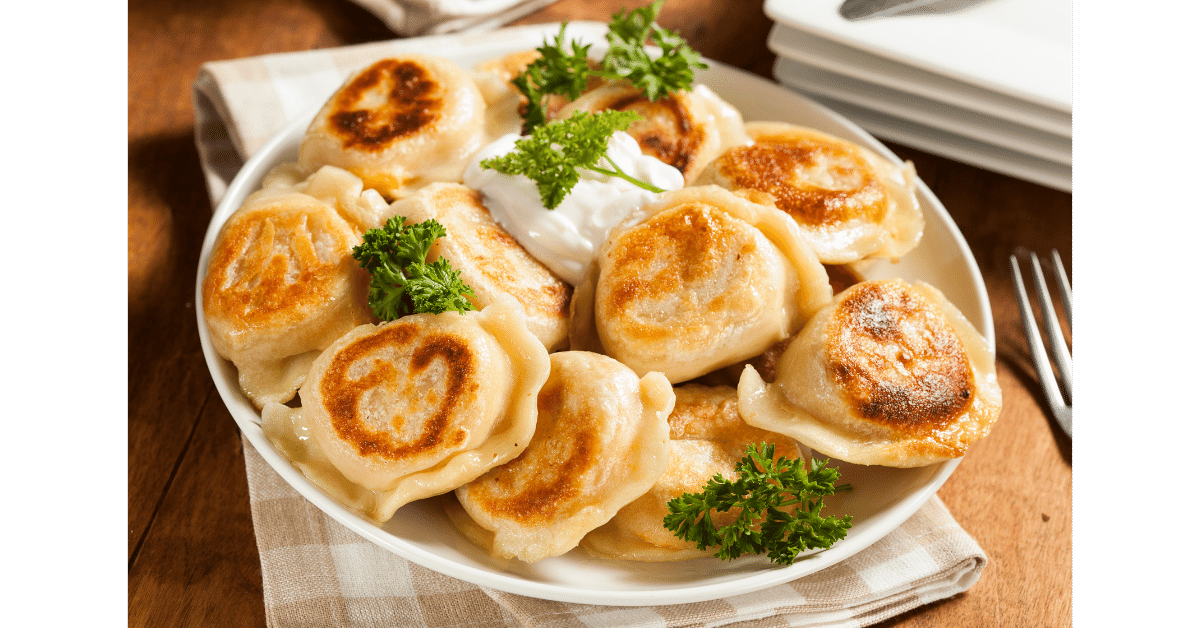 Na Zdrowie! I toast you the Polish way because you want to learn how to cook pierogies from fresh or frozen. For the uninformed (but hopefully not for long), this classic comfort food is the most globally recognizable authentic Polish dish.

You can serve pierogis as the main course, savory side dishes, or a substitution for cooked potatoes. However you decide, you came to the right place to learn the ways to get the best results for cooking the historic Polish pierogi.

What is Pierogi Exactly?

Many cultures have their own version of the dumpling. And why not? They’re the best! For the eastern European countries, their signature dumpling is pierogi.

The pierogi first arrived in the Polish territories in the 13th century, most likely arriving from the Far East from the region of today’s Ukraine. The dish wasn’t introduced to western countries until 1682 when pierogi recipes first appeared in the Polish cookbook, Compendium Ferculorum.

What characterizes a pierogi is its half-circular shape made from either noodle flour or a pasty portion of dough. While traditionally stuffed with potatoes and quark cheese, a variety of ingredients are popularly used today.

These can range from sweet fillings like fresh fruit and cream cheese to meat like beef, fish, chicken, and bacon bits. Or to vegetables like mushrooms and chopped onion – basically whatever’s in season!

How to Serve Pierogies (and Say It!)

To “top it off,” the traditional Polish topping is a dollop of sour cream, fried onions, or pork rinds. They can be enjoyed hot, cold, deep-fried, baked, or boiled.

The word “pierogies” is widely used as the plural in America and English-speaking countries. However, the word pierogi is actually already plural in the Polish language. The single form of pierogi is pieróg, but they’re traditionally served in pairs or more. Thus, the plural form pierogi is always used.

The flexibility in ingredients and toppings made the pierogi a popular and nostalgic food for kids, like chicken nuggets but for the Polish.

Are Chilled or Frozen Pierogi as Good as Homemade?

Homemade pierogies are of course better than frozen ones… I mean, that’s true for every type of food. But Pierogi dough needs to be both soft and durable enough so it doesn’t dominate the overall flavor. Getting it just right takes time and practice.

Hence, the popularity of frozen pierogi, which can still be delicious!

Of course, cooking pre-made or frozen pierogies is a lot easier than making homemade pierogies. So, it’s no surprise that most people buy frozen pierogies or chilled pierogi from a store’s refrigerator to cook them at home.

If you’re like me, you might just seek out a Polish restaurant to avoid any cooking altogether.

Is there a difference between cooking frozen pierogi and pre-made ones? Big time.

For one, the refrigerated ones bought at the store are already pre-cooked. So they just need to be cooked by your preferred method below to be ready to eat. Just be sure to check the label since the chilled “fresh” pierogi could go bad after only a few days.

For frozen pierogi, you can boil or microwave them (see below for instructions). You can’t just drop pierogi straight from the freezer into a frying pan. Don’t thaw them out in the fridge. This results in the dough’s integrity being compromised and they’ll fall apart.

Once thawed by one of those two ways, you can use any of the below cooking methods that work for chilled pierogi,

How to Cook Pierogies (7 Different Ways)

Now we get to learn how to cook pierogi in several different ways, including boil, pan-fry, oven-bake, slow cooker, deep fry, and even air fry. The baking, frying, and slow-cooking methods work for both frozen, chilled, and handmade pierogi.

So, whether you just made pierogi from scratch or are pulling them out of a box, here’s how to cook them up. Just keep in mind that the instructions on the pre-made packages should take priority over what is said below.

How to Boil Pierogi

Heat a large pot of water to a boil, adding some salt to the water. Place pierogies into the boiling water and wait until you see the pierogi float.

Once done, use a slotted spoon to remove. Some people like eating them just like this, but I recommend following up with baking or one of the frying methods below.

How to Microwave Pierogi

This method only applies to frozen. Trust me, do not attempt with chilled. Yuck.

Place your frozen pierogi in a microwave-safe bowl and add boiling water, with enough water to cover them all. Microwave for 5 minutes on high power then serve! Or, better yet, follow up with a frying method.

How to Oven-Bake Pierogi

Pre-heat oven to 350 degrees Fahrenheit. Grease a baking sheet or line with aluminum foil. In a single layer, evenly space and then brush pierogies with a bit of oil or melted butter.

Cover with foil and bake for a cooking time of 20 minutes. Turn pierogies halfway through to distribute heat correctly.

How to Pan-Fry Pierogi

If you like crispy pierogies then the pan-fry pierogi is the method for you.

First, grease a large skillet with butter. If you have toppings to cook, such as onions, add these first and cook for a few minutes with medium heat before adding the pierogi. Cook pierogies until that beautiful golden brown.

How to Deep Fry Pierogi

Heat on medium a large pot filled with a neutral oil, then place pierogis a few at a time carefully. Make sure you don’t put in too many since they’ll start to stick together and become a hassle.

Once they float and turn golden, remove and place on a paper towel to cool and soak up that extra fat.

How to Air Fry Pierogi

Place about 5-6 pierogies in the air fryer basket and cook them at 365 degrees for 8-10 minutes for fresh, or 16-18 minutes for frozen until crispy.

How to Cook Pierogi in a Slow Cooker

Line the bottom of the pot with pierogies. Spray tops of pierogies with cooking spray or brush with butter to prevent sticking. Continue layering the pierogies on top of each other, spraying the tops.

Feel free to add cooked toppings like bacon in there. Then cook on low heat for 3-4 hours until fully cooked.

That’s Polish for bon appétit! Now that you know how to cook frozen pierogi (& fresh) several different ways, you might as well try ’em all.

You’ll discover if you like crispier pierogi or fork-tender, hot or cold, or sweet or savory. Or, let’s be honest, all of the above!