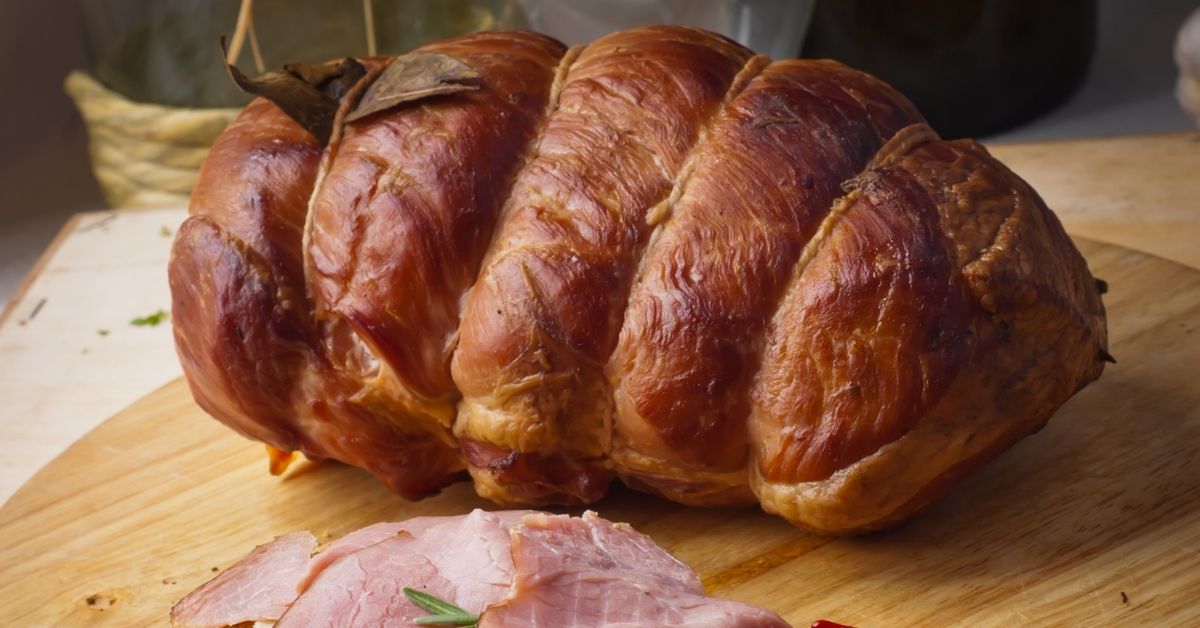 If you’re researching how to smoke a whole raw ham (or half ham, for that matter), you should start by reading the following. There are plenty of step-by-step guides to walk you through the process, but you need to understand the basics first.

The answers to the following FAQ will ensure that you end up with a perfectly-cooked ham with whatever ham recipe you choose. I answer all of the most common questions that affect how well your ham will turn out in the end.

I recommend skimming through all of the questions and answers, but you can jump ahead by clicking on the question:

By the way, I admire that you’re refusing to do a pre-cooked ham and learning how to smoke a fresh ham instead. Popping a cured ham in a roasting pan is certainly easier than slowly smoking it, but not as delicious. So, kudos to you!

Note: there’s no culinary shame in enjoying an easy-to-make spiral cut ham. If you’re looking for that “traditional ham flavor,” see How to Cook Spiral Ham Without Drying It Out.

This may seem an odd question, but it comes up a lot. Why? Because fresh ham doesn’t actually taste like the ham you’re used to buying from the grocery store. It tastes more like a deliciously moist pork tenderloin with crisp skin.

City hams (aka precooked hams) that most people buy for a special occasion are typically wet-cured in a saltwater brine. Fresh ham, on the other hand, is not brined or pre-cooked. So, it lives up to its name of being fresh for you to insert the salty and smoke flavor you desire.

Did you know fresh ham is known by another name, too? Green ham! That’s rather Dr. Seuss-esque, don’t you think? But the name stems from green symbolizing “fresh” rather than from a children’s book.

The best temperature to smoke fresh ham is 225 degrees F. That’s the low and slow method that meat enthusiasts always recommend. If you’re short on time, however, you can go up to 250 degrees F and still get great results. Just be sure to keep a close eye on the internal temp!

Cooking at high temperatures is the surest way to dry out your ham. So, try not to rush the smoking process. Low heat and a patient cook are key to achieving the best results.

How Long to Smoke a Fresh Ham Per Pound?

Another FAQ will answer the questions of internal temp shortly. But first, I want to give you a couple of quick examples of estimating cook time.

How Long Does It Take to Smoke a 10 lb Fresh Ham?

Using 15-20 minutes per pound as our guide, a 10 lb fresh ham will take about 2.5 hours to 3 hours and 20 minutes to smoke. Remember, this cook time is only an estimate, and bone-in ham will take longer than boneless hams. The real “determiner of doneness” is when the center of the ham reaches the ideal internal temperature.

But what if you need to cook fresh ham faster? You could bump the temperature up to 250 degrees…

As always, this cooking time is only a guide and doneness depends on the internal temperature. So, let’s finally answer that FAQ next.

According to the USDA, the internal temp for fresh ham must reach 145 degrees F (and rest for 3 minutes) to be safe to eat. Insert an instant read thermometer into the center of the ham, careful not to touch the bone. Remove the ham when the internal temperature reaches 145 degrees and, for best results, let it rest for 15 minutes.

What Is the Best Wood to Smoke Fresh Ham?

Apple wood chips are probably the most popular for smoking fresh ham. Apple has a sweet, mild flavor that complements ham and balances out the smoke flavor. However, other fruit flavors, like cherry or peach, are good alternatives. You can also try oak, pecan, maple, and hickory and expect great results.

Can You Smoke a Fresh Ham Without Brining?

You can smoke a fresh ham without brining, but it is not recommended. Brining fresh ham helps it retain its moisture and adds to the flavor. So, if you don’t brine, you risk it coming out dry and much less flavorful than if you do.

Thankfully, brining is easy, which you can see in this video on how to brine a ham with simple brine ingredients.

Should I Smoke a Ham Covered or Uncovered?

Most enthusiasts agree that you should not cover a ham for the first hour to hour and a half of smoking. After the initial hour, you can then choose to loosely cover the ham with aluminum foil, especially if it looks like it’s starting to dry out. This will help keep it moist, along with the following tips…

How Do You Keep a Ham From Drying Out When Smoking?

The best way to keep a ham from drying out when smoking is to cook it at low temperatures (225 degrees F ideally). You also need to remove it once the internal temperature of the ham reaches 140 degrees F to avoid overcooking. Lastly, spritz the ham every 30 minutes as it smokes. If it looks like it’s drying out, you can loosely cover it with aluminum foil after the first hour of smoking.

What Do You Spray on Ham When Smoking?

The “spritz” you spray on ham isn’t anything fancy. In fact, water will do just fine. However, most pit bosses recommend an apple-based spritz, like apple cider vinegar or apple juice. Or, a 50:50 mix of either of those ingredients with water. Fill any spray bottle with your spritz of choice and spray the ham every 30 minutes while smoking.

How Long Should Ham Rest Before Carving?

Ham should rest for 15 minutes before carving. This rest period allows the juices to redistribute in the meat instead of pouring out as soon as you pierce it with a sharp knife. Letting it rest also makes it easier to cut, as it will be a bit firmer (and not as hot) than when you first remove it from the heat.

Do You Cover Ham When Resting?

It’s not a good idea to tightly cover ham when resting as the trapped heat can cook it further and dry it out. However, you can loosely tent the ham with aluminum foil to keep it from cooling down too much. That way, it will still be warm but not dry when you finally bite into it.

What Is the Best Way to Carve a Ham?

The best way to carve a ham is to first cut one or two slices off the bottom of the ham. This creates a flat base to rest the ham on while you carve. Next, carve slices perpendicular to the bone, stopping your knife once you reach the bone. Then, cut along the bone to release the slices.

How Long is Fresh Ham Good For?

Whether you’re smoking a holiday ham for Easter dinner or planning to enjoy a whole ham over many meals, I wish you the best! I hope your ham cooks to perfection and you impress your guests as much as yourself. May you make the most of your time with family… and of your leftover ham 🙂

I’m passionate about food, but not about cooking. That’s why I write about easy, efficient ways to make delicious food. Simplicity at its finest! When I’m not eating, I like to… oh, who am I kidding? Everything I like to do revolves around food!