How Long to Smoke a 3lb Brisket (+ Easy Tips) 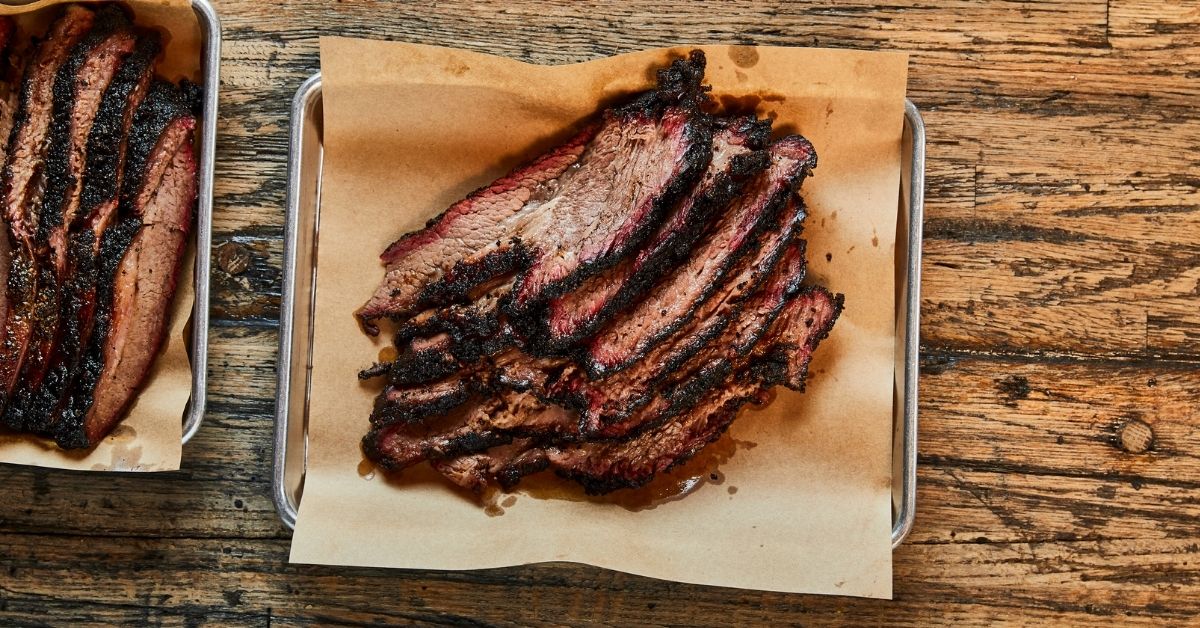 The juicy, tender brisket is the holy grail of barbecue for good reason. If you have a passion for getting the best results out of your meat, you want to add “the best brisket” to your list of accomplishments.

There’s even a special word for those considered experts at this particular craft (many located in Central Texas) – the label of “pitmaster.” And among these pitmasters, there is general consensus that the best way to be the envy of the neighborhood with your beef brisket is by cooking it in a smoker.

But let’s be real.

Next time you’re in the mood for some smoked brisket, you don’t want to have to spend all day and night cooking a whole brisket that weighs 16 pounds. Sometimes you just want a reasonably small cut of meat to enjoy with one other or on your own. This way you won’t have to worry about tons of leftover brisket (not that that’s a bad thing).

So, here’s the good news. Whether you’re cooking a heavy whole packer brisket that includes the point and the flat, or a considerably smaller 3-pound brisket, the cooking process is the same to get that signature tender meat.

How Do You Smoke a 3lb Brisket?

The general rule of thumb for any smoker brisket recipe is “low and slow.”

The “low” refers to setting the smoker to a low temperature. Higher temperatures will too quickly break down the excess fat and a lot of connective tissue which are the reasons for its nice tender texture when smoked right at low heat. If you smoke at high heat, likely done to save time, you run the risk of being left with chewy meat.

But don’t beat yourself up if your first time using the smoker results in some dry meat. That’s what BBQ sauce is for! (My favorite is Kinder’s BBQ Sauce.)

Now, the “slow” means slow cooking, as in smoking the brisket for a long time. Granted, for a 3-pound brisket, it won’t be a long smoke, especially compared to a whole flat cut.

How Long Should You Smoke a Brisket per Pound?

The actual smoking time depends on the cooking temperature chosen to reach the ideal internal temperature of the brisket. There are two most often cited “ideal temperature” options to set the smoker: 225 and 250 degrees Fahrenheit.

If your smoker temperature is set to 225 degrees, the brisket will take about 1-1/2 to 2 hours for every pound until ready. When smoking at 250 degrees, a good rule of thumb is to use 1 hour of cook time for every pound of brisket.

There is some debate as to what is the best temperature to set the smoker. You might be thinking, since “low and slow” is the directive, then shouldn’t common wisdom dictate that 225 is better, since it’s lower? Technically yes, but that also depends on the circumstances…

Namely, 225 degrees is better if you’re dealing with a smaller cut of brisket.

The pitmasters like those in Texas generally say the right temperature is 250 degrees, but that’s mainly due to the huge portions of meat they’re smoking on the daily to sell commercially.

For example, the actual cook time for smoking a giant 14 pound brisket could take upwards of 28 hours until the ideal internal temperature of the meat is reached. Let that sink in – 28 HOURS. Who wants to wait over an entire day inhaling that heavenly aroma of smoked meat to chow down?

While smoking at 250 may not be as forgiving as 225 and should theoretically be more tender, the difference is ultimately negligible enough to save several hours.

However, you might as well smoke at 225 if you’re only dealing with a 3-pound brisket.

How Long to Smoke a 3lb Brisket?

For example, to help speed up the cooking time, it helps to take the meat out of the fridge about an hour before the smoker and bring it up to room temperature.

You also want to use a cutting board and boning knife to trim the extra layer of fat, leaving behind about a 1/4 inch of the fat cap. Be sure to remove the silver skin (that tough filmy layer that serves as a heat shield). You don’t want that.

Pro tip: If you buy your brisket from a butcher and not grocery stores, you can request in advance that they trim the meat for you.

After you trim, you can place the dry rub on the brisket. Keep in mind the meat will be so flavorful you won’t need a ton of seasoning. The pitmasters even say just kosher salt and black pepper will do.

Then the last thing, and perhaps most important, is to let the brisket rest once it’s done smoking. It will be ready to eat when the temperature comes down to 145 degrees. Here’s more info on How Long to Rest Brisket & Why You Should.

Keep in mind you don’t just let it rest out in the open. Flies shouldn’t get the first bite! Place the brisket inside a container, like a cooler without ice or a roasting pan with a lid, so it sits unaffected by the climate.

Of course, it helps to have an instant-read digital meat thermometer on hand to monitor the smoked brisket’s progress. The overall cook time can be unpredictable due to fluctuating temperatures inside the smoker. This is why it helps to have an electric smoker that is always telling you the changes inside.

Once the internal temp reaches between 190 degrees and 203 degrees Fahrenheit, the brisket is ready to be removed from the smoker or charcoal grill. If the instant-read meat thermometer reads a higher internal temperature than 203, all the juices inside would have mostly burned off. This means a dry brisket.

How Long Does It Take to Smoke a 3 lb Brisket at 200 Degrees?

If you really want to play it safe and not overcook your brisket, smoke your brisket at 200 degrees! It will take a bit longer though, between 2 and 2 hours & 15 minutes per pound. That amounts to a 3-pound brisket taking between 6 and 6 hours & 45 minutes to smoke.

The important thing is to let it reach that 190 to 200-degree range, otherwise, it will wind up too tough and annoying to eat. Why? That much fat and all the connective tissue (otherwise known as collagen) in this part of the cow needs to be broken down with enough heat.

Now that you’ve got cooking times down, you probably have a few remaining questions. Here are answers to the most common questions about brisket.

Can You Cook a Brisket Too Slow?

As long as you don’t let your internal temp of the brisket rise above 203 degrees, there’s no such thing as “too slow.”

However, even if you smoke at 200 degrees, it’s worth noting you can’t leave that brisket in the smoker forever. It’s important that within a reasonable amount of time the brisket is pulled out since the fat continues to burn off even if the internal temperature reaches 200 and stays there.

Do You Smoke a Brisket Fat Side Up or Down?

When you place the brisket in the smoker, position it with the fat side facing the heat source. The fat helps to cook the meat and tenderize it.

When Should I Wrap My Brisket?

There’s a part of the smoking process called the “stall.” Here’s what happens. Once the meat thermometer reaches around 165 degrees, the temperature literally stalls for a little bit, not rising at the same pace as before.

The pitmasters overcome the stall with a well-known strategy called the “Texas crutch method.” This is when you wrap your brisket, in wax-free butcher paper.

However, it’s worth noting that if you’re smoking a 3-pound brisket, don’t bother with this strategy unless you’re really short on time to finish cooking. This technique is most applicable to bigger pieces of meat.

But just in case, this is how it works. Remove your brisket from the smoker once your instant-read thermometer hits 165 in the thickest part of the brisket.

Wrap it like your see deli workers wrap a sandwich, like an airtight double wrap, and place it back inside the smoker for the rest of the time.

How Do You Keep Brisket Moist?

First, place a water pan in your smoker with the brisket. Then spray the drip pan with some water, apple juice, or apple cider vinegar. This will evaporate, so check back every hour or so and replenish the liquids.

While the Texas Crutch method retains moisture in the brisket due to being wrapped tightly, you probably won’t be using this method with a small 3lb brisket. That’s why I suggest the above water pan method.

Just as Kevin from the classic “Home Alone” enjoyed “an extra cheese pizza, just for me,” so will you enjoy this 3-pound brisket, just for you.