How Long to Smoke 10 lb Brisket for Best Results 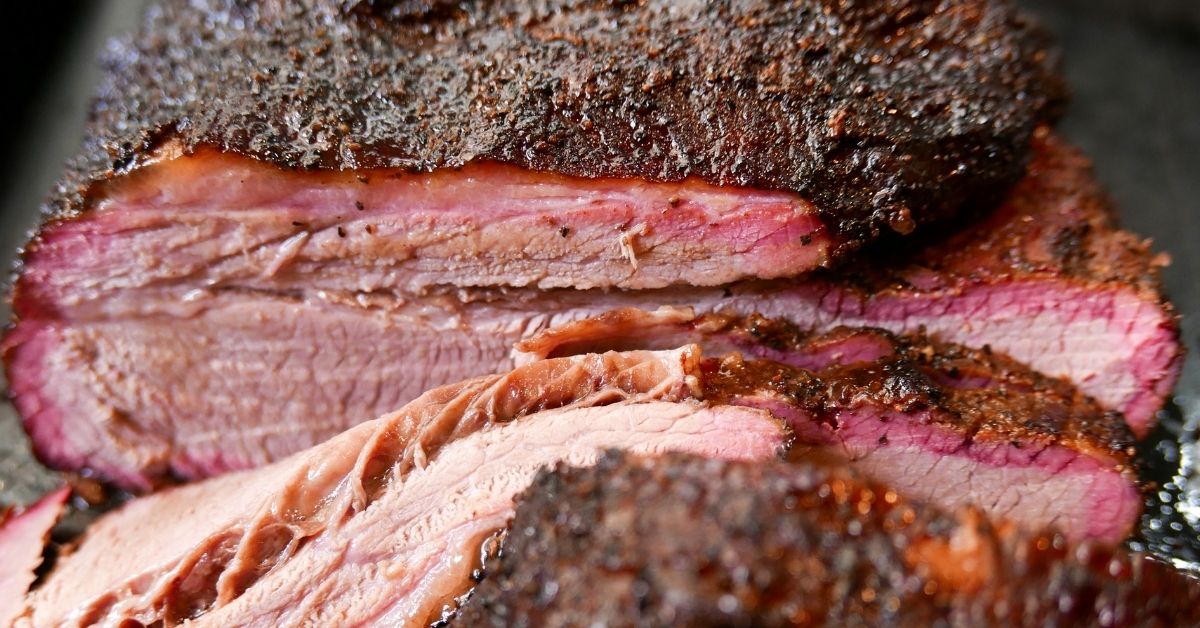 When there’s Texas-style beef brisket around, people flock to it as if it’s a religious experience, and for good reason.

A juicy, tender brisket can inspire people to wait hours in line to sink their teeth into this tasty piece of meat at BBQ joints. Or if you’re yielding good results in your own backyard, you won’t exactly have a shortage of friends or family making plans to get out of the house. Not with that unrivaled smoke flavor on the line.

So whether this is your first time or you’re already a “pitmaster,” you’ve come to the right place to learn how to give enough time to smoking your 10-pound brisket, or any size of the brisket for that matter.

As you read on you’ll see that the answer for how much cook time makes the best brisket isn’t so simple and straightforward. There are a number of factors that go into getting the best results and not letting your hard work be in vain by serving dried out, overcooked meat.

Keeping that in mind, we’ll first get into the ranges in cooking time you can expect so you can plan ahead for your smoked brisket recipe. Then we’ll get into more specifics on how you can better ensure your total cook turns you into that BBQ hero for your hungry guests.

The First Rule of Thumb, and Most Important Is…

To go “low and slow.” As in, the cooking temperature should be low, and for a long time in the smoker.

How low exactly? Now, this is where some different opinions come in.

Since the goal is to get the internal temperature of the meat to the ideal 203 degrees Fahrenheit, the smoker’s heat should be above that. The most popular go-to cooking temperatures are 250 degrees and 225 degrees.

Is It Better to Smoke Brisket at 225 or 250 Degrees Fahrenheit?

At first glance, the answer might seem obvious. A smoker temperature of 225 degrees is lower than 250 and thus will result in more tender meat, right? Wrong! Well, technically it isn’t wrong but there’s a reason 250 degrees is preferred…

According to the low and slow method, 225 degrees should give more tender results. However, most agree that 250 degrees is better than 225.

While not as low as 225, 250 degrees isn’t such a big difference that you will be able to tell in the flavor and tenderness. But more importantly, cooking at 250 can make a big difference in overall cook time.

How much less time? It depends on the weight of the brisket, but we’re talking a difference of hours, not minutes. Let’s get into how much time we’re talking exactly.

If you’re smoking a 14 lb brisket (a full packer) at 225, you’re likely looking at more than a day to smoke it! Most people aren’t that patient.

When cooking a brisket at 250 degrees, one pound of meat equals one hour of cook time. By that measure, 10 pounds of brisket takes about 10 hours in the smoker.

Compared to smoking at 225 degrees, the difference is more than a couple of hours. And the gap widens the higher the brisket weight gets.

Let’s look at cook time for bigger and smaller briskets for comparison’s sake.

How Long Does It Take to Smoke a 12 Pound Brisket at 225 Degrees?

Talk about a slow method of cooking, right? Cooking at 225 means an entire day in the smoker, without even taking into account the other steps of the process that add even more time to factor in.

This isn’t to say it’s never a good idea to choose 225. If you aren’t buying a whole packer brisket that’s 14 pounds, electing to go with a premium smaller size cut such as wagyu brisket, 225 is ideal.

How Long Does It Take to Smoke a 5 Pound Brisket?

A more manageable 5-pound brisket at 225 degrees, with 1 1/2 to 2 hours per pound would take between 7 1/2 to 10 hours to cook in the smoker. At 250 degrees, which is just as effective in making a tender brisket, the cook time will take about 5 hours.

Can You Overcook Brisket at 225 Degrees?

Technically you can, but this would be by no means a disaster for your brisket. The ideal internal temperature is between 190 and 200 degrees Fahrenheit before needing to be removed from the heat. (Some say the “magic temp” is 203 degrees.)

If you were to leave your brisket a little too long, the highest temperature it would reach would be 225, which would result in a slightly less tender brisket. But hey, that’s what BBQ sauce is for!

Why would it be less tender? Well, what’s happening exactly when you’re smoking a brisket is that the connective tissue, collagen, and fat inside and around the meat melts down. This process is what makes the brisket juicy to the bite. The hotter the brisket gets, the more this stuff burns out and leaves behind dryer meat.

Can You Smoke a Brisket in 8 Hours?

If you’re following the “low and slow” technique using the recommended maximum temperature of 250 degrees, you can smoke an 8-pound brisket in 8 hours.

Of course, there are ways to still smoke a heavier brisket in that short amount of time. Even pitmasters will raise the heat to finish smoking a brisket or pork shoulder faster, but don’t venture higher than 300 degrees.

For perspective, cooking brisket at 300 degrees takes about 30 to 45 minutes per pound. So, you could conceivably smoke a gigantic 16-pound brisket in 8 hours. But you’d be risking tenderness if you’re truly hamstrung by this time crunch.

While brisket can be a pretty forgiving meat to cook due to how much fat is inside, and harder to mess up than leaner kinds of meat, I wouldn’t recommend pushing your luck.

So here are other factors to consider so you can effectively plan ahead your brisket smoke ahead of time.

Shopping for the Right Brisket

So when you’re in the grocery store or butcher, you want to choose a cut of brisket with the most consistent white fatty marbling throughout it. You may notice different classes of brisket at different price points. USDA Prime, the most expensive kind of cut, typically has more of this marbling than the less expensive USDA Choice. Some stores don’t have Prime, so try to buy the Choice grade at a minimum.

Brisket meat is found in the breast of the cow. The thickness of the meat is due to the muscle fibers there to help the cow walk. This is why it’s good to have a layer of fat on the sides of the brisket, so it tenderizes those tough fibers within.

An important factor to consider is what part of the brisket you’re buying.

If you’re buying a 10-pound brisket, then you are likely buying either the brisket flat or point part, not both. A whole brisket weighs on average 14 pounds and is called the “packer.”

What’s the Difference Between Flat and Point Brisket?

The point cut, also known as the “deckle,” is the fatty part of the brisket. This part is essential to taste like that juicy, tender brisket you’re hoping to achieve. Because of the excess fat though, it’s worth noting this will be trimmed off and what you’re buying will be reduced by about a third in weight.

The flat section is typically a leaner cut because the deckle is removed. It’s called “flat” because of its shape. Leaner cut means less juices to help make it tender.

Keep these differences in mind when buying a smaller sized brisket. If you have less time to cook it, you may want to choose a leaner kind. The less fat, the less time it takes to cook. Though, again, the less fat could mean less tender.

Trimming Brisket to Prepare for the Smoker

With a particularly fatty cut, trim some of that extra layer of fat off the outside of the brisket with a boning knife. If you’re buying from a local butcher, they might trim it for you if you ask in advance. Don’t cut off all the fat though – just the part you know you won’t eat anyway.

There’s a fat layer that is about 1 inch thick called a fat cap. Trim it off but leave behind about a quarter of an inch. This will give the meat flavor during the smoking process.

You’ll also want to remove the “silver skin.” The silver skin is the filmy layer that only serves to block smoke and fat from cooking the meat properly.

After the trimming is done, season with some black pepper and kosher salt. Maybe some garlic powder too. No over-the-top dry rub is needed when the meat tastes this good.

Do You Smoke Brisket Fat Side Up or Down?

When placing the brisket in the smoker, position the fat side of the meat to face the heat source. This way the fat helps cook the meat and tenderize it.

Depending on your type of smoker, you can determine where the main source of heat is emanating.

Should You Wrap Brisket When Smoking?

A part of the brisket smoking process is known as the “stall.” Once the meat thermometer reads the brisket at 165 degrees, this temperature literally stalls a bit too long for comfort, not rising at the same pace as before.

One strategy used by the pros to overcome the stall is the well-known “Texas crutch method.” This is when you wrap your brisket, in wax-free pink butcher paper (not parchment paper).

This is how it works. Remove your brisket from the smoker once your instant-read thermometer hits 165 in the thickest part of the brisket. If you’re cooking a particularly large cut, this will happen around the 6-hour mark in the smoker.

*Note about a meat thermometer: Smoking meat can be unpredictable. Even if you have an electric smoker that automatically adjusts the temperature for you, it still helps to check the meat with a thermometer from time to time to gauge its progress.

Wrap it like your see deli workers wrap a sandwich and place it back inside the smoker. A wrapped brisket, even in a double wrap to keep it airtight will allow the internal temperature to rise at a faster rate again.

How Do You Keep Brisket Moist?

If you’re cooking low and slow and the brisket has nice fatty marbling, then it should keep moist on its own. Wrapping it with the Texas Crutch method helps to retain moisture, too. But if you’re cooking it faster or the marbling isn’t as good as you’d like, you can try the following…

You can place a water pan in your smoker with the brisket. Then spray the drip pan with some water, apple juice or apple cider vinegar. This will evaporate, so check back every hour or so and replenish the liquids.

Once your brisket reads 190 – 200 degrees F (or if you want to try the “magic” 203 degrees), it’s important to remove the meat and let your brisket rest. Keep in mind, the temp can still raise up to 10 degrees after you remove it from the smoker. That’s why I like to take mine out around 195 degrees because it can still reach that magic 203.

Let it rest for about an hour, until the temperature comes down to 145 degrees. Here’s more info on How Long to Rest Brisket & Why You Should.

But don’t just let it rest out in the open. Leave the brisket in its butcher paper and place it in a container, like a cooler without ice, so it sits unaffected by the climate.

Okay. Now you can eat it.

So happy cooking and may the verdict be good news next time you’re smoking. If so, you’re doing United States cuisine proud.

Now please send some leftover brisket to me, thanks!