How Long to Grill Pork Tenderloin Per Pound (Easy Recipe) 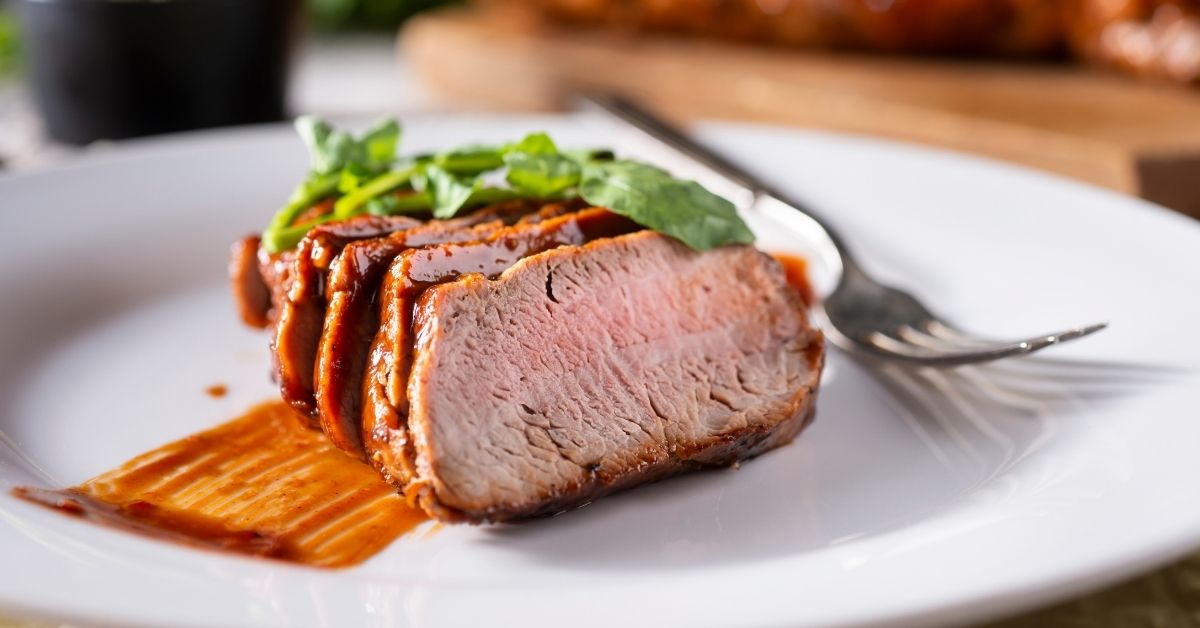 Grilling season has arrived! What better way to celebrate the outdoor cooking season than with a delicious pork tenderloin? It’s juicy and tender, and when cooked on a gas grill, it is full of flavor.

If you have not cooked pork tenderloin on a gas grill before, don’t worry. I’ve got you covered!

First, I explain the difference between pork loin and tenderloin. (No, they are not the same thing!**) Then, I walk you through how to prep, season, and grill your tenderloin to perfection.

**NOTE: If you’re cooking pork loin (not pork tenderloin), jump over to this article: How Long to Cooke Pork Loin on Grill.

Pork tenderloin is a very popular cut of meat because, as its name suggests, it is very tender. It is also a boneless, long, and narrow cut of meat and is the leanest pork cut you can find.

Pork Tenderloin is a specific cut of meat taken from the muscle on a swine’s lower back. It’s the same muscle that in chicken produces the chicken tenders. Or, beef tenderloin or filet mignon in beef.

This muscle isn’t used often, so it produces a succulent, delicate piece of meat.

Is Pork Loin the Same as Tenderloin?

Pork tenderloin and pork loin are not the same cut of meat. They taste different and do not cook the same. There is also a significant price difference (tenderloin is more expensive).

The main difference between the two is the size. You can usually count on finding a 1 to 1.5 lb pork tenderloin at the grocery store. You may even spot a 2 lb cut. However, pork loin is usually sold in the 2 – 4 lb range.

A pork loin goes by other names, sometimes referred to as a pork roast or pork loin roast. It is a broader and fatter cut of meat than a tenderloin. It can be boneless, but you also might find a bone-in variety. The boneless cut is usually sold to make it easier to slice after cooking.

While the pork loin does come from the back of the swine like the tenderloin, it is found in a different location. A pork loin is still a lean cut of meat with a tender bite; it also features a juicy fat cap. But it’s not quite at the caliber of pork tenderloin.

Pork Loin vs. Pork Tenderloin: Which Should I Buy?

If trying to decide between the two, it comes down more to budget and the number of people you are feeding. For feeding a big family or group, pork loin is the more economical choice. If cooked right, you can still enjoy juicy, tender results.

If you’re cooking for a small party (or yourself), then it’s worth splurging on pork tenderloin if your budget allows.

Just be sure to follow recipes specific to pork loin or pork tenderloin. If, for instance, you use a pork loin recipe for tenderloin, you’ll likely overcook it.

Gas Grill vs. Charcoal Grill: Which is Best?

Naming the best way to cook pork tenderloin is an inexact science. Everyone likes to cook using different methods and skillsets. Both the gas grill and the charcoal grill have their benefits and drawbacks. They can cook pork loin to perfection and give the maximum flavor.

But, frankly, the best option usually comes down to whichever grill you have! If, however, you do have the option between grills, I do recommend a gas grill over charcoal for pork tenderloin. You’ll understand why here…

Benefits of Using a Gas Grill

There are many rewards for cooking pork on a gas grill. A gas grill cooks foods quickly and, most importantly, it’s easy to set and maintain a given temperature that you want.

In addition, you do not need a long warm-up time when cooking pork on a gas grill. The heating time is usually only about 5-10 minutes. If you get home late from work or sports practice, you can have your food ready to cook in no time!

Benefits of Using a Charcoal Grill

Just as there are benefits to cooking with a gas grill, cooking with charcoal also has advantages. A charcoal grill is better than gas for slow cooks. (Pork tenderloin, however, is not a slow cook!)

You can also cook at a temperature as low as you want or as high as a 1,200 degrees F temperature! But that’s also a drawback…

It takes practice to master keeping the temperature of a charcoal grill just right. You have to pay closer attention to grilling than you do with a gas grill. This is especially true when grilling pork tenderloin since it cooks quickly.

It also takes a little longer to prep than gas but is usually ready to cook in about 30 minutes.

You also might see a more significant amount of clean-up with a charcoal grill, like needing to dispose of ash more often.

How Long to Grill Pork Tenderloin Per Pound

Pork tenderloin cooks FAST! It does not become more tender the longer it cooks. Over medium heat (about 350 degrees F), cook for 8-10 minutes per pound. That means a standard 1.5 lb pork tenderloin cooks in 12-15 minutes. Here’s how you know exactly when it’s done…

So, I recommend to remove the pork tenderloin from the heat when its internal temp reaches 140 degrees F. I also recommend letting it rest longer, for a minimum of 5-10 minutes instead of the 3 minutes the USDA recommends. This gives the juices plenty of time to reabsorb and redistribute.

Can Pork Tenderloin Be a Little Pink?

Yes, according to the USDA, a little pink is okay for pork. They even recently revised their recommended safe internal temperature to account for this. It used to be 160 degrees F, but is now 145 degrees F. And, at 145 degrees F, the center may still be a little bit pink.

How to Grill the Perfect Pork Tenderloin (Step by Step)

I want to give you an easy-to-follow, step-by-step pork recipe that any pork grilling novice can pull off!

The first step to excellent pork tenderloin is getting your grill nice and hot. Clean and oil the grill grates, then preheat it at medium heat (approximately 350 degrees F).

While preheating your grill, prep the pork.

Trim the pork tenderloin and remove the silver skin. Silverskin is a tough connective tissue that does not render during cooking. It turns into a tough, chewy, and unappetizing bite.

To remove the silver skin, lay the tenderloin on a cutting surface. The silver skin simply looks like a thin opaque layer over the meat. Gently work a sharp knife under one end of the silver skin. Once it lifts a little, use a paper towel to grab it. Then gently but forcibly pull it up.

The silver skin usually pulls up in one long sheet. If it doesn’t, repeat the same process until it is removed.

You can also remove any chunks of fat, but don’t cut off all of the fat. Leave the fatty marbling and thin layers of fat, as it will help tenderize the meat.

This step is optional. Brining is not necessary but can help tenderize the pork. It will also add moisture to your meat.

Place the pork in the bag and let it sit in the refrigerator for a few hours. When you’re ready to cook it, pull out the meat and rinse. Pat it dry, and it’s ready for the next step!

Note: If you chose to brine, you do not need to add additional salt at this time.

Pork tenderloin is a premium cut of meat, so I recommend lightly seasoning it with salt, pepper, and garlic powder for your first try. However, if you like bolder flavors or want to mix it up, you can use your favorite pork seasoning.

Grilling Your Pork on a Grill

At the 10-minute mark, use your instant-read thermometer to monitor it. When its internal temp reaches 140 degrees F, remove it and let it rest for 5-10 minutes. (Remember, it’ll rise by 5-10 degrees after removing it to reach the safe internal temp of 145.)

(Some may suggest cooking over indirect heat, but it’s really not necessary as long as you can keep it at a consistent medium heat.)

1. Prepare the tenderloin by trimming off excess fat and removing the silver skin.

2. If you are brining your meat, place the brine ingredients in a ziplock bag. Place the pork in the bag and set it in the refrigerator for at least 1-2 hours (longer is fine).

4. Preheat the grill to 350 degrees F. This setting will be medium heat on most grills.

5. Place the tenderloin over direct heat. Close the lid.

6. Rotate the meat every 4-5 minutes until the internal temperature of the pork reaches 140 degrees F. (It should rise to the safe 145 degrees after you remove it from the heat.)

6. Pull the meat from the grill. Let the pork rest for at least 5 minutes before cutting it into thick slices with a sharp knife.

Other Types of Pork

While pork loin and pork tenderloin are two choice cuts of pork, you might be interested in different cuts of meat as well. Here are some other great options for your next meal…

All of these different cuts turn out well when cooked in the oven. And, of course, pork tenderloin is mouthwatering when grilled!

As a general rule of thumb, boneless roasts cook better when tied in place with kitchen twine or another cotton substantial. This is also something that your butcher may happily do for you if you ask.

Pork chops are another one that can describe different cuts of pork. You might find pork loin chops that are wonderful when broiled, grilled, or pan-fried.

Or, pork shoulder chops, sometimes marketed as blade chops, are a tougher cut of meat. They, too, can be great when broiled, grilled, or pan-fried. But you would want to tenderize or marinate them before cooking to get the best bite and flavor.

Some people mistakenly think that pork belly comes from the stomach of a pig. In reality, the flesh surrounds the abdomen and is located on the underside of the hog.

It is a long cut of meat that has a thick fat layer running through it. When this layer of fat renders, the result is a moist, mouthwatering, and oh-so-flavorful piece of pork.

This meat is often turned into bacon or pancetta and is often seen as “braised pork belly in fine dining cuisine.”

More Where That Came From

Pork chops and roasts make up a good percentage of the well-loved pork dishes. However, with grilling season upon us, you might want to try out several other cuts! They are: