How Long to Grill Brats After Boiling (Easy Recipe) 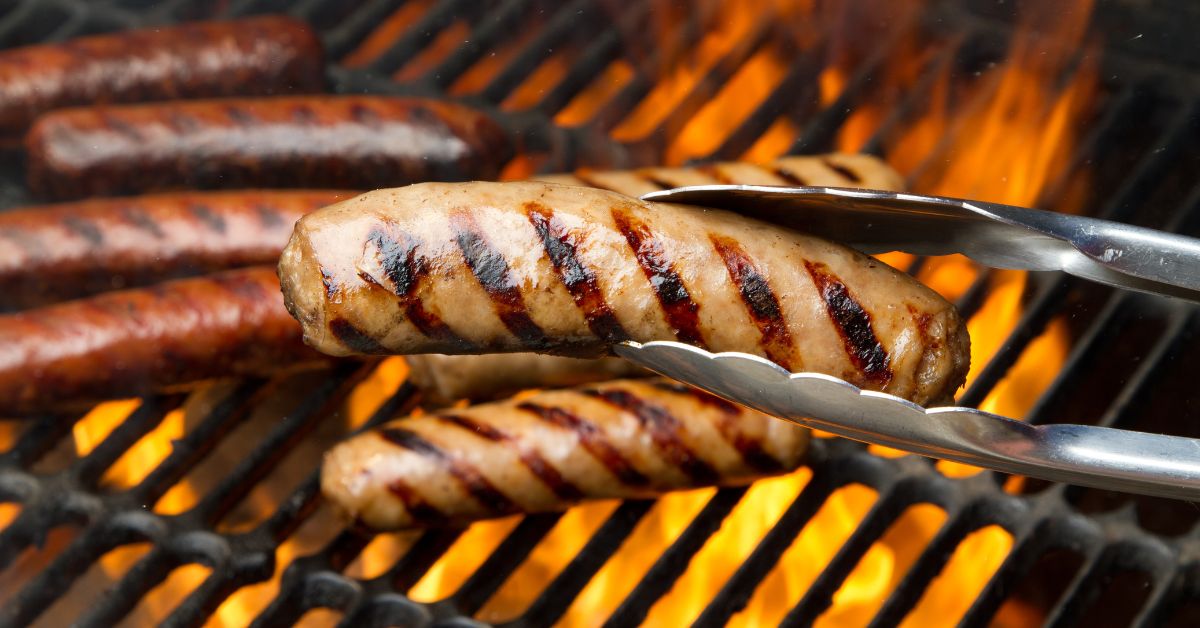 If you’re wondering how long to grill brats after boiling, you’ve come to the right place. I give you a clear and succinct answer below. Plus, I give you a quick and easy recipe to follow that ensures the best results every time.

The best way to cook this delicious meal is to boil brats over medium heat before giving them a nice sear over some hot grill grates. Then serve them piping hot with your favorite beer, and you’ve got a restaurant-worthy meal right at home!

Here’s how to do it just right…

Traditional brats are made from uncooked sausage. There are many different types of brats available to choose from. Mostly you will find pork brats, but there are also beef and veal brats at some specialty meat stores.

If you’re looking for delicious flavor options, you can try different varieties by companies like Johnsonville brats. They have many different flavor profiles, including classic and fun limited edition flavors, such as:

You can also find specialty flavors that are made after a specific location or state, like Wisconsin beer brats and Hatch Chile Links.

When preparing uncooked bratwursts (little pink) you want to make sure that the internal temperature reaches 160 degrees F. That is because it is the recommended cooking temperature of pork and is safe for human consumption. That also goes for beef and veal brats, should you cook those.

Should You Boil Brats in Beer?

The answer is yes! You can cook brats without beer, but the beer adds another layer of flavor to enhance any type of bratwurst you cook.

Most yummy bratwurst recipes call for cooking your brats with beer. In fact, my recipe below calls for soaking them in beer for several hours before cooking them in the beer mixture.

The good news is you can use any kind of beer to enhance your food. However, pale lagers work best. Stronger beers can give brats an acrid flavor.

However, if you’re cooking specialty-flavored brats, you might want to test boiling them in water vs. beer. The beer flavor could interfere with the carefully-designed and balanced spices of the pre-seasoned brats.

How Long to Grill Brats After Boiling

Grill brats over indirect heat for about 10 minutes, then sear over direct heat for a few minutes. More precisely, cook until their internal temp reaches a safe 160 degrees F. It’s best to boil the brats to 145 degrees F, then grill them to 160 degrees. (See details below.)

For the best results, follow these four easy steps that take you from boiling to searing…

How to Boil & Grill Brats

Boiling brats and then grilling them is the best method to cook sausages because it retains their flavorful juices, making them succulent. Finishing them off on the grill infuses that tasty smoky flavor and gives that nice char on the outside.

By the way, you can streamline the cooking process and just fry brats if you’re tight on time. Here’s How to Fry Bratwurst (3 Easy Steps).

1. Soak the Brats in Beer

Place your raw brats in a glass pan. Then cover them with enough beer so that they are submerged in the liquid. You can likely cover the brats with two bottles or cans of beer, depending on the thickness of the meat.

You can use any beer that you want. Ones with light flavor will enhance the taste of the brats without taking away the flavor of the meat. But if you enjoy the flavor of a stronger beer, then use it!

Cover the bratwurst sausages and place them in the fridge overnight or for a minimum of six hours.

When you are ready to start cooking dinner, remove the beer mixture from the fridge. Then go outdoors and heat your grill to medium-high heat so it’s ready to grill your brats after boiling them.

To boil your brats, place a cast-iron skillet on the stove. Heat the pan to medium-high heat. If you have a stovetop that cooks hot, turn it to medium-low heat.

Place about a half stick of butter in the pan and allow it to melt. It is a good idea to cube the butter as you toss it in the pan so that it melts evenly.

Then place the beer and uncooked fresh bratwurst into the pan along with the sliced yellow onion. Bring the entire mixture to a slow boil and allow the sausage to cook for about 10 minutes.

Your goal is to parboil the meat so that it gets mostly cooked. But then you want to finish the sausages on the grill to give it that delicious smoky flavor and char taste on the outside.

The process of heating up and parboiling your meat should take about 20-25 minutes. Pull the sausages once the internal temperature of the bratwurst reaches 145 degrees F. Use a reliable meat thermometer to check the temperature.

4. Finish Cooking Brats on the Grill

Once the boiled brats reach 145 degrees F, transfer the links to the indirect side of the grill (the side without the direct heat). Cook for about 10 minutes, or until the internal link temperature reaches 160 degrees F.

Then use grill tongs to transfer the sausage to direct heat. Let them cook for a few more minutes until the outside gets a nice golden brown color.

6-24 hours before cooking, place the uncooked brats in a glass dish. Cover with your favorite beer, and then cover the entire dish. Place it in the refrigerator to marinate.

About 30 minutes before cooking, remove the brats from the fridge. Then heat the grill.

While the grill is heating, place a deep cast-iron skillet on your stove top and heat to medium-high. Place the 1/2 stick of butter, cubed, in the pan and melt.

Once the butter is melted, place the beer mixture and brats into the skillet. Then toss in the onion. Cook for about 10 minutes until the brats reach an internal temperature of 145 degrees F.

Remove the brats and place them on the hot grill. You can also grill the onions or keep them cooking in the skillet until they are translucent and have a nice golden color indicating they are caramelized.

Cook the brats with indirect heat until they reach an internal temperature of 160 degrees F. Then move them to direct heat and continue cooking until they have a nice char.

Remove the brats and let them cool for a few minutes. Then serve and enjoy!

What to Serve with Your Brats

When making brats for your main meal, it’s really nice to serve them with brioche buns. You can also make up some hot dogs for any picky eaters you might have at home. You can also have a variety of mustards and other toppings for your meat.

Some great toppings to include are:

If you also want to offer some delicious side dishes, try:

Of course, it is a nice touch to also serve ice cold beer that matches what you soaked your brats in to round out the meal. Enjoy your savory brats!