How Long to Cook Steak on George Foreman (+ Recipes) 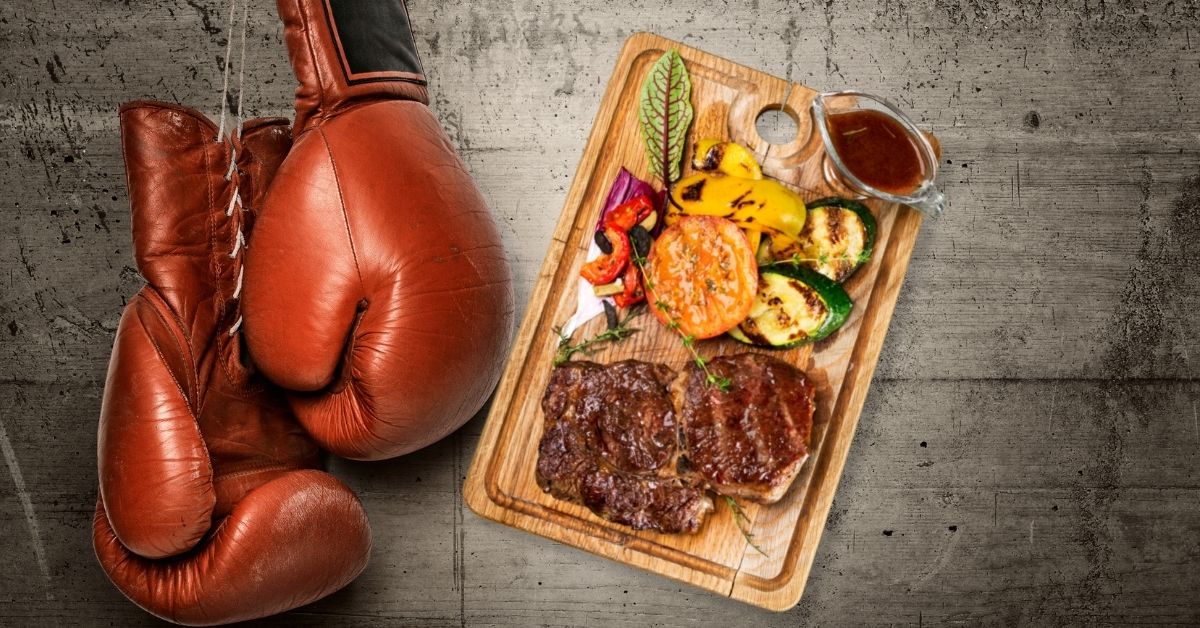 Who doesn’t love the lean, mean, fat-reducing grilling machine? The George Foreman Grill combines our desire to cook meat in a healthier way with our fandom for the athlete who made a name for himself knocking people out.

While George Foreman’s boxing career is a bit before my time, I have such nostalgia for how the George Foreman Grill cooks food. The first time I ever had lamb chops was made by mom on this electric grill. I found it so delicious I have compared every lamb chop since to that childhood tasty meal.

These days, I love to cook steak, but I would also prefer to not get major heartburn and watch my waistline expand in the blink of an eye. Oh, aging.

A barbecue outdoor grill is the most traditional way to get your best result for a good steak. However, George Foreman’s Grill can give you a healthier version of a grilled steak from the comfort of your kitchen.

How? Its unique grilling process.

What is So Special About a George Foreman Grill?

The George Foreman Grill is an indoor grill that has two grilling surfaces. Like a panini maker, it can cook two sides at the same time. Even better yet, the grill is at an angle. So, when the fat burns off the meat, gravity does the work to let it fall away from the food you’ll eat.

Why is this important?

Think about cooking fatty marbled ribeye steaks on a cast iron pan. As the fat burns off, it has nowhere to go on the flat surface, so the pan will just collect the fat and soak the meat with it. While this is certainly tasty, it is fatty with a capital F. But with the slanted grill, a waiting drip pan collects the excess fat from the meat without making a mess.

Won’t Taking the Fat Out of Steak Sacrifice Flavor?

Don’t worry. You won’t even notice the absence of fat if you cook the steak for the right amount of time and get the ideal internal temperature.

Even though the fat melts off, the key to a juicy steak is cooking it right and letting it rest for enough time after removing it from the grill plates. I’ll explain in more detail soon how to do just that. Luckily with this grill, it’s as convenient as it gets.

George Foreman didn’t invent the grill, and as a matter of fact, almost passed on the opportunity to attach his name to the new invention! Now that would have been a punch to the gut.

The story goes that in 1994, Michael Boehm of Illinois invented the grill with the goal of cooking two sides of a burger at the same time. All while letting excess fat drip away from the cooking surface.

Mr. Boehm and his partner approached George Foreman through a contact with the offer to have the grill bear George’s name. But with no upfront money offered, George was resistant until his wife Joan tried it and talked up the quality of the product. George signed on to what is now known as one of the most successful sports marketing deals in history.

Since you don’t have to flip the meat on this hot grill, the perfect steak mainly comes down to prep work and recommended grilling times. There are 4 steps I recommend. Most people skip the 4th step and that’s where the biggest mistake lies!

If you’re like me, there’s nothing more appetizing-looking than a thick steak. But to succeed on this double-sided grill, you’ll have the most successful cooking process with thin steaks. This is because this electric grill doesn’t get as hot as a charcoal grill that cooks food on high heat. The George Foreman Grill can’t reach that kind of temperature.

Since it’s cooking at a lower heat, the only way you can still achieve that delicious steak taste is to feed it a thinner piece of meat. This way the grill’s heat is able to reach through.

So when shopping, aim for a half-inch to one-inch steak. It’s okay if all the store has is slightly thicker, because you could just pound that thing down with a meat mallet!

Also called a meat tenderizer, this common kitchen utensil looks like a tiny version of Thor’s hammer. One side is flat and the other is comprised of a bunch of little teeth to pierce the meat.

To use it, place steaks on a clean cutting board and pound the outside of the meat with the piercing side. You’ll notice the meat unbind itself from strips of fat and tendons. While this process might seem like beating flavor out of the food, it’ll actually result in a more tender steak in the end.

Most steak recipes call for marinating the meat, ideally overnight, for ideal tenderness. So if you want to unleash your inner Otis Redding and try a little tenderness, you can mix up a quick marinade.

You can use this marinade for any steak, really, but I like it best with New York strip steak.

Mix the Worcestershire sauce, red wine vinegar, and onion powder together and marinate the meat in this mixture for an hour in the fridge.

Then remove the steak from the fridge and use a sharp knife to slice 10-12 slits in one side of the beef. Take about a clove’s worth of minced garlic (~1 tsp) and stick those pieces in those slits. Then brush the entire surface with olive oil.

For a ribeye steak or sirloin steak, the marinating is even easier. Here’s a quick marinade for an 8-ounce fillet.

Mix the ingredients together then coat this mixture around all surfaces of the meat.

Now it’s time to heat up the grill, baby! Preheat the grill for 5 minutes on the high setting.

NOTE: If you’re cooking a ribeye, let it rest outside the fridge for about a half-hour, allowing it to come down to room temperature before cooking it.

That’s right, I just did a play on words on the legal drama “A Time To Kill.” So sue me! Of course, in this version, the star wouldn’t be Sandra Bullock, but rather, Frank Grillo.

Anyway, after the grill has preheated for 5 minutes, place the steaks on the angled surface and then close the grill for that double direct heat. You’ll hear a very satisfying, and maybe even a little scary, sizzling noise.

How Long to Cook Steak on George Foreman Grill

Now here’s a general rule of thumb for cooking times. If your steak is between 1/2 to 1-inch thick, you’ll cook for 4-7 minutes for medium-rare and 7-9 minutes for medium. For more accurate doneness, use a meat thermometer to the ideal internal temperature as follows…

For more accurate desired doneness, lift the lid after 5 minutes of cooking. Stick a digital meat thermometer into the exact middle of the steak, vertically and horizontally. Remove the steak once it reaches a few degrees below the desired internal temperature.

So, if you desire a rare steak and have a meat thermometer, remove the steak from the heat and let it rest once the temperature reads around 122˚F. In a few minutes, it will jump up to 125˚F while resting. Science!

If you don’t have a thermometer, just cook it on the high setting if applicable for 5 minutes, or 7 minutes if you prefer it more well done, then remove.

This is the step too many people skip but shouldn’t!

It’s crucial to let the steak rest for about 5 minutes once removed from the grill. This is because the steak actually continues to cook on its own even while not exposed to heat. Plus, resting lets the juices redistribute through the meat instead of pouring onto your plate when you cut into it.

If you get over-eager and eat it immediately off the grill, you’ll be eating a less tender, less juicy steak.

And I’m not just referring to the steak. Enjoy cleaning the cooled-off grill with warm soapy water, as opposed to the task of scraping down a cast iron pan or barbecue grill. Just be careful not to spill that drip tray on yourself. Not that that has ever happened to me. Ahem. Worth it!