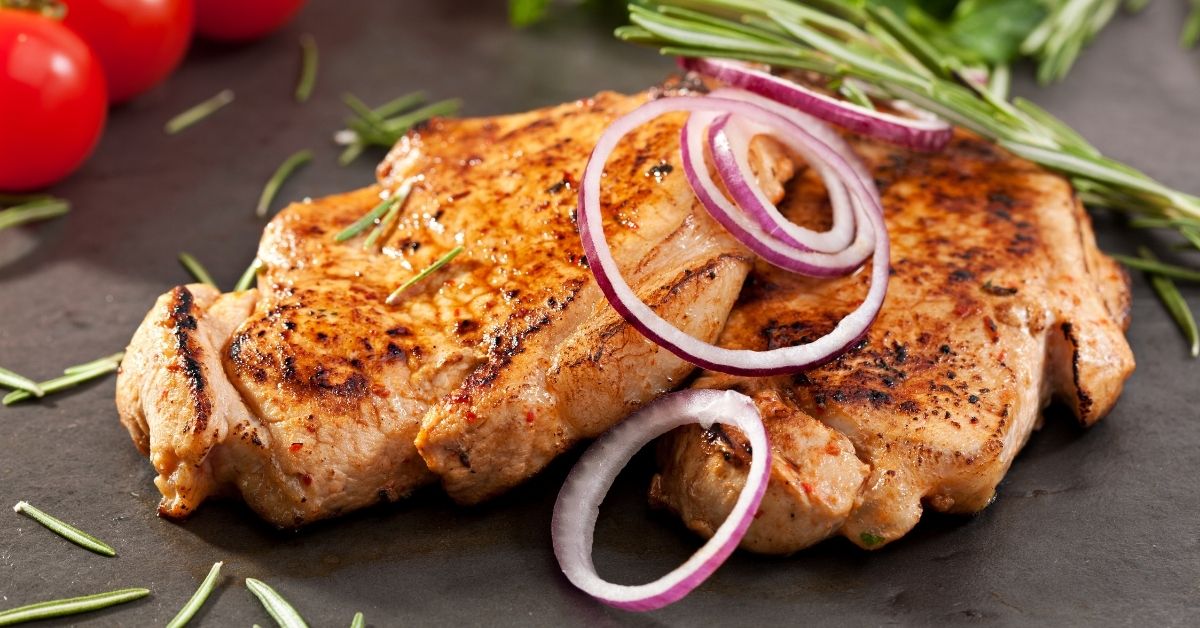 How long to cook pork loin in oven at 350, you ask? There are a number of factors that go into determining that answer. So, we’re going to quickly go through the rules of thumb to determine the correct times for any size of pork loin.

From bacon to ribs to pork chops to pork shoulder, the flavors and textures of all the different meats from a pig vary wildly. But out of all the pork recipes out there, most people underestimate the culinary delight that is a good pork loin roast recipe.

Sure, it doesn’t pack the same punch as bacon, but a boneless pork loin roast is delicious in different ways, both hearty and savory. Prove it, you say? Try this lean cut of meat in a flavorful Cubano sandwich or chop it up to mix into some Chinese lo mein.

So why is pork loin underappreciated? Perhaps due to its cheaper price at the grocery store, people assume this roast pork won’t be as tasty as, let’s say, its fattier cousins like the best pork tenderloin.

But if you’re expanding your repertoire of easy dinners, this pork loin recipe may surprise you. You’ll get juicy meat with simple ingredients and a reasonable total cooking time.

What Temperature Should I Cook a Pork Loin At?

The National Pork Board recommends that the ready-to-eat internal temperature of the roast should be between 145 and 150 degrees Fahrenheit (or 63 to 65 degrees C) for medium-rare. The cook time it takes to get there depends on a number of factors, such as the oven temperature and size of the roast.

This is especially true if you’re baking a smaller portion, such as a pound of meat. Unless you’re in a rush, it benefits you to cook it low and slow so. Otherwise, the narrow temperature window doesn’t pass you by.

The only time it makes sense to bake at 400 degrees or higher is if you’re cooking several pounds of pork and are short on time.

How Long to Cook Pork Loin in Oven at 350

Ideally, use an instant-read thermometer to give you accurate results immediately. (This is a must-have if you’re looking to roast meat in general, from smoking pork shoulder to cooking chuck roast.) You stick it into the thickest part of the pork, removing it once it reads 145 degrees for the maximum amount of flavor.

So, for example, a 4-pound pork loin should take approximately 1 hour and 40 minutes to reach the internal temp of 145 degrees F. However, actual cook time can range from 1 hour and 20 minutes to 2 hours, depending on the thickness of the loin.

Let’s take a quick look at another example…

Since it can take between 20 and 30 minutes per pound at 350 degrees, a 2 lb pork loin will take between 40 minutes and 1 hour in the oven. Why can the cook time vary so much?…

The reason a 2-pound pork loin can vary so much in time is the thickness of the meat. The thinner the portion, the faster the temperature of the meat will rise.

There’s also one more important factor to consider: the bone.

There is a difference in cooking time for boneless vs. bone-in pork loin. Boneless pork loin takes a little bit less time to bake than pork with a bone. Allot about 10 percent more cooking time if your pork loin has the bone included.

Let’s refer back to the earlier 4-pound example. A 4-pound pork loin with the bone in will take approximately 1 hour and 50 minutes to reach the 145-degree internal temp as opposed to 1 hour and 40 minutes.

If you need to save time and are vigilant with the meat thermometer, you can cook pork at 375 degrees instead of 350. At 375 degrees, it takes about 20 minutes for every pound of pork loin, saving you 5 minutes per pound. You must keep a close eye on the internal temp, so you don’t miss the ideal 145-150 degree window.

Now you see the number of variables that can inform the amount of time pork loin takes to bake. Let’s get into how you roast pork loin correctly, step by step, from shopping to prep to cooking.

What Do You Need to Cook Pork Loin in the Oven?

To nail the roasted pork loin for you and your guests, there are some basics you need to have on hand first.

A rimmed baking sheet would do, too. As the fat cooks off, liquid gathers in this baking dish. The rim ensures it doesn’t pour all over the bottom of your oven!

There are two methods of cooking pork loin. One with first searing the outside of a pork roast before popping it in the oven, and the other way skipping this step. I personally love the texture of a crisp surface that comes from searing. But, it’s by no means essential to cooking the interior meat.

If you do choose to sear your roast, a cast-iron pan with a little bit of olive oil allows you to sear it and bake it all in one pan. I’ll tell you why this is the best way in three words: Minimizes clean up.

To make sure your pork loin cooks evenly and consistently, you may need to trim the pork loin before cooking. Unless you buy your fresh pork from the store or butcher already trimmed, you’ll need to take care of this step yourself. And you can’t trim without a…

If you have ever sliced raw chicken breast, you know the value of a very sharp knife. Pork is slippery! The duller the knife, the bigger chance the knife will slip. We don’t want that.

When it comes to pork loin, it’s not the fat you need to trim. We want the fat on there! It helps make the end result the right amount of juicy. Pork loin is pretty lean anyway. It doesn’t have an excess fat layer like beef brisket (check this out next if that sounds like your next challenge).

What you want to trim though is this tough, filmy layer called the silver skin. While it’s not crucial, it will save you a little time in the oven. Keeping the silver skin on the pork loin will make it harder for the heat to evenly cook the meat. Plus, it can keep your seasoning and marinade from soaking into the meat.

Sometimes the silver skin will come already trimmed off from the store, but still good to be prepared!

Whether you plan to sear the pork loin or not, tongs are essential when moving around a piece of meat typically over 2 pounds. You’ll need them to turn the roast so all sides are seared properly, or to move it from the baking dish to another plate to slice without the risk of damaging or dropping it.

To add even more flavor and help keep the seasoning from burning off, it helps to marinate the meat before seasoning it and placing it in the oven. Different recipes will call for different ingredients for the marinade, but some of the typical choices are dijon mustard, olive oil, soy sauce, and apple cider vinegar.

Unlike some other kinds of meat, you don’t need to be shy with the seasoning. Pork loin, being naturally moist, absorbs seasoning like coins into a couch. It disappears.

A teaspoon of salt or more will do, with black pepper of course. Then you can get creative, using whatever you like, such as Italian seasoning, onion powder, garlic powder, or paprika. You can even use some brown sugar too if you’re feeling feisty!

7 – The Pork Loin Itself

Shopping for the right kind of pork is surprisingly easy to mess up. I’ve even found myself in the situation where I’m shopping for a pork loin recipe, but got home to find I had accidentally bought a Smithfield pork tenderloin.

You might be thinking, what’s the big deal? Pork tenderloin is pretty much the same thing as pork loin, right? I mean, they sound alike. And that’s exactly why it’s tricky when you’re shopping only going by the label. Sometimes grocery stores make it even more complicated, labeling pork loin in a number of different ways, such as center-cut rib roast or center loin roast.

What’s the Difference Between Pork Loin and Pork Tenderloin?

Let’s start with the shape. Pork loin is wide, flat, and cylindrical. On the other hand, pork tenderloin is cylindrical but skinny at almost a foot long. While both fresh-cut muscle meats come from the backside of the cow, pork tenderloin comes from the meat under the area with muscles, earning its “tender” designation.

Now let’s talk size. Pork loin portions are typically in the 2 to 4-pound range (which can feed about 6 people). Pork tenderloin is typically sold in 1-pound packages (and priced quite a bit higher).

Now let’s go full archaeologist and talk bones. You won’t find bones in pork tenderloin, but do have the option of buying bone-in or boneless for a pork loin. If you do have a choice at the store, go with bone-in, as it gives the roast a bit more flavor.

Granted, these particular cuts of meat aren’t SO different. If you compare a pork tenderloin recipe with a pork loin one, you’ll find the cooking process in the oven to be almost the same. That being said…

Note: Some of the earlier steps vary depending on whether you choose to sear the pork loin or not before you place the pork in the oven.

Take pork loin out of the fridge one hour before cooking to allow it to come up to room temperature. Meat roasts more efficiently when it doesn’t start cooking cold. Trim that silver skin off if it’s still there but leave the fat alone!

Pat the pork loin dry and dip it in whatever marinade you chose to use, then hit it with the seasoning.

IF SEARING, heat the cast-iron skillet on medium-high heat. Once heated, place the pork loin on the skillet, turning it once it develops a nice sear. Then place the skillet in the preheated oven, leaving the meat fat side up.

OR IF NOT SEARING, place the pork loin on the bottom of the pan, fat side up to allow the fat to help cook the meat using gravity. Do not use a baking pan cover or foil for either option. Leave uncovered the entire time in the oven.

Bake for about 25 minutes per pound of pork loin, or check often with a meat thermometer until it shows 145 degrees F temperature. This temperature is if you want it medium-rare, but it will still be tasty up to 160 degrees. Don’t let the temperature climb above this final 160F or it will be chewy and dry.

Remove the roast from the oven to let the meat rest, so the juices inside can properly redistribute (science!). To keep it hot, tent it with aluminum foil if you have it.

After about 5 to 10 minutes, slice and serve. Once you see the inside, you know you did a good job if the middle of the white meat is a little pink. If you chose to sear it (which again, I recommend), you should get that crunchy texture when you take a bite.

And the last step, eat it up and enjoy! Since pork loin roasts are up to 4 pounds, pop that leftover pork in the fridge and put it in a sandwich the next day, Thanksgiving-style. Considering how affordable pork loin is compared to other pork, it’ll be the meal that keeps on giving.