How Long to Cook a 14 lb Brisket: Oven, Grill & Smoker 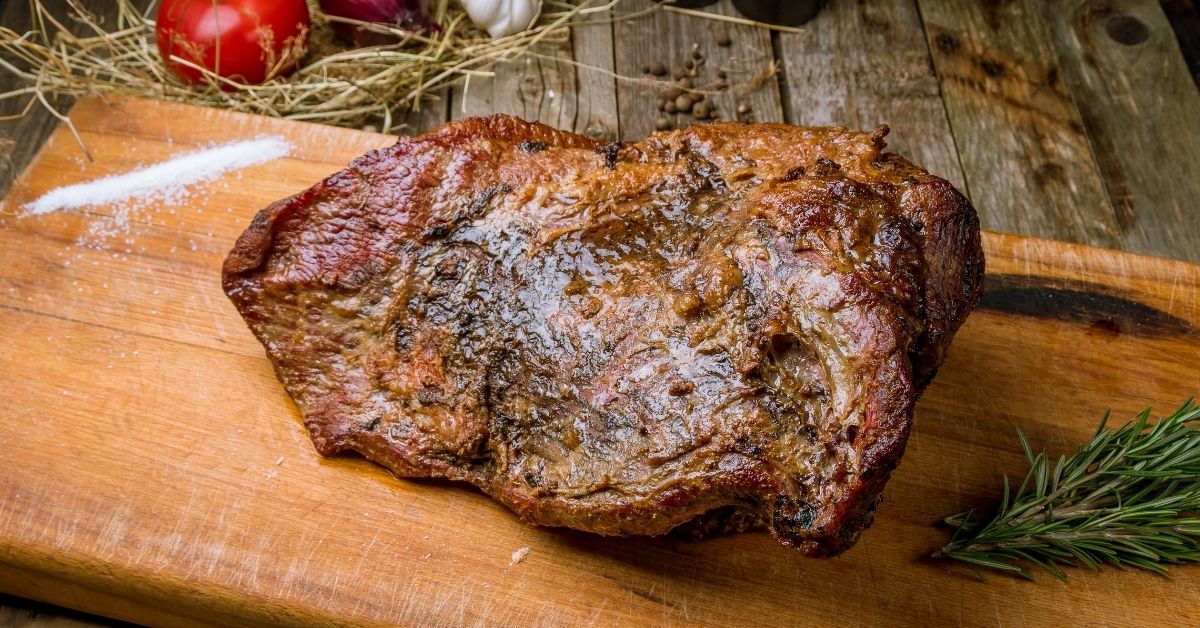 So you’re preparing to cook a beef brisket. And not just any brisket… 14 glorious pounds of it! Somebody’s having a party.

And any party where a juicy brisket is provided will be a pretty good one in my experience. A raw brisket that starts off at 14 pounds can feed about 14 people, even after the size of the brisket reduces about a third after it’s trimmed and the fat is burned off.

Or hey, if you’re cooking it just for yourself, that’s my kind of party for one.

Given the weight of the brisket, your cooking process is limited to either a smoker, a big enough oven, a dutch oven, or a big enough water pan. Let’s face it, you’re not going to fit a whole brisket of this heft into a slow cooker.

But regardless of whether you cook or smoke a 14 lb brisket, 16-pound brisket, or even a 3-pound piece, the best way to cook one is like Barry White’s ballad singing voice – low and slow.

And with the right cooking time, cooking temperature, and rest time, whoever eats your final result will be singing “Can’t Get Enough of Your Love, Babe” right into their plate.

While a number of factors can affect this, give yourself 24 hours for the entire process. Whether you smoke or bake brisket, the rule of thumb is 1 pound of meat equals 1 hour of cook time at 250 degrees Fahrenheit. For 14 lbs, expect approximately 14 hours until the internal temperature reaches 190-200 ˚F.

Therefore, allot 14 hours while checking its progress along the way with a meat thermometer into the thickest part of the brisket. Once the internal temp reaches around 190 to 200 degrees, remove it from heat and let it rest for about an hour, until the temperature falls to the 145 ˚F measure. This resting period is so the juices in the meat redistribute.

(Here’s more info on How Long to Rest Brisket & Why You Should.)

The same math applies to smaller cuts. It’ll take around 10 hours to cook a 10-pound brisket, and 13 hours for a 13-pound brisket.

Cooking at this low temperature for a long time results in a more tender bite. A slow cook is more forgiving, giving you leeway when monitoring the internal temperature of the meat. This enables you to make on-the-fly cooking duration changes if need be.

At 225 degrees, plan to smoke (or bake) the brisket for about 1 1/2 to 2 hours for every pound. A 14 lb brisket could take upwards of 28 hours until the ideal internal temperature of 190-200˚F. Waiting for more than a day might be too long. So, smokers generally aim for 250 degrees, which translates to about 1 hour per pound.

Here’s a tip from brisket master Aaron Franklin of the legendary Austin, Texas BBQ spot Franklin Barbecue (so I listen): At around the 6-hour mark in the heat smoker, wrap the entire brisket in wax-free pink butcher paper, and leave it in there for the remainder of the cook.

How Long Does It Take to Grill a 14 lb Brisket?

Compared to the oven or smoker, you can save 4 or more hours cooking a brisket on the grill. A 14-pound brisket will take 9-10 hours on the grill if you follow the right steps.

To avoid uneven charring by the grill’s hot fire, first place the brisket on a double layer of aluminum foil. You want enough tin foil to curl up the sides to create a pot shape.

Then add a cup of water before placing another layer of tin foil over the top to enclose the meat completely in foil. The water will trap moisture with the meat while it cooks, resulting in a more tender bake.

How Long Do You Cook a 14 lb Brisket in the Oven?

Cooking a brisket in the oven follows the same general rule of thumb: 1 hour of cook time per 1 lb of meat at 250 degrees Fahrenheit. For 14 lbs, expect approximately 14 hours until the internal temperature reaches 190-200 ˚F.

When baking a brisket, you want to use a similar strategy to cooking brisket on the grill. Place the brisket in a covered roasting pan, and add a cup of water into the bottom to trap the moisture as it cooks.

What’s the Fastest Way to Cook a 14 lb Brisket?

By simmering on a stovetop, you could finish cooking a 14-pound brisket in only 6 hours. If you don’t have enough time, this works pretty good in a pinch!

How do you cook a brisket on the stovetop?

First, take a large pot and add enough water to completely submerge the entire brisket. Bring that water to a boil. Once the water is at that rolling boil, reduce the stove to low heat to simmer. Then let it be for about 6 hours.

Just be sure to not go too far! You need to make sure the water doesn’t boil over or any other hazard common to cooking on the stovetop.

Another method to cook a brisket in about half the time is literally the opposite of the “low and slow.” That’s right, it’s called “hot and fast.” While this technique is oft-debated in the BBQ community, some actually swear by it.

So here’s how you do it, but since it’s a bit less forgiving, you’re going to need a quality meat thermometer so you aren’t left with crusty, dry meat.

After preheating the smoker to 350 degrees, you’ll want to use the “Texas Crutch” technique. This means wrapping the beef in foil tightly. Then place it inside the smoker fat side down.

Once the internal temp reaches 170 degrees, flip the tin foil-covered brisket so that the fat side faces up. It’s done when both the thermometer reads 203 degrees AND it’s tender. You can leave the brisket in the smoker a little longer if it’s still too tough.

Many BBQers wait until the meat stalls before implementing the crutch method. The “stall” is when the internal temperature stops steadily rising and instead plateaus for a while. This happens when the juices from the meat counteract the heat, like sweating.

We talk about the stall in a similar article: How Long to Smoke 8 lb Pork Shoulder (Infographic).

How to Cook Brisket Faster (But Not Too Fast)

While the above time-saving methods will still yield delicious briskets, nothing beats the flavors found from the traditional low and slow way.

But it’s natural that you sometimes want to save time when you can. The good news is there are several steps you can take to reduce the amount of time you need to cook your brisket, no matter its size.

Before you start cooking your brisket, first bring the meat to room temperature. Simply take it out of the fridge and let it sit on your counter for an hour before exposing it to heat.

The less fat surrounding the meat, the less time it takes to cook. For anyone who has cooked London Broil, you’ve seen how lean meat can cook quickly (in this case a little too quickly).

So, if you have a particularly fatty cut, trim some of that extra fat off the outer layer that you already know you won’t eat when it’s done. Sometimes butcher shops will trim it for you if you ask in advance.

Use a cooking method that can keep a consistent temperature, like a type of smoker with an electric thermometer, instead of relying on just wood. The predictability of how long the cook will take can save you time in the long run. Otherwise, every time you have to open the smoker, you’re affecting the cooking process by releasing heat.

It’s true you won’t get that great photo at the end of the entire brisket all charred and juicy looking, but at least you would have saved time simply by dividing them into two pieces!

How Do You Pick a Good Brisket?

A good rule of thumb is to pick the one with the most consistent white fatty marbling. Fat is what gives brisket and other kinds of beef and pork its flavor, tender with every bite. It’s also the main factor that determines the different grades of meat that cost differently at the store.

USDA Prime is the best brisket because of its high marbling (in other words, more fat throughout). While it’s worth the extra couple bucks per pound, every grocery store doesn’t have this kind of cut. So for best results, try to choose a piece of meat with USDA Choice grade at a minimum.

How to Cook Brisket for the First Time

Here are the basic steps for cooking brisket in the oven. Or, if you’re smoking the brisket, scroll down.

How to Smoke a Brisket (Easy Step-by-Step)

The basic steps to smoke a brisket are as follows:

If you’re a newbie, all of this might sound intimidating. But if you have the gear, it’s a process that can be incredibly rewarding, even for your first time.

No need to have any fancy dry rub or spice mixture on hand. The meat itself will provide enough flavor, believe me.

The only seasoning rub you need is good ol’ kosher salt and black pepper. That’s what a lot of pro barbecuers in Texas uses.

Just remember that nobody becomes a grill or smoke master overnight (even though the masters actually do their smoking literally overnight). Feel free to experiment to find your personal preference, and most importantly, invite me over and share some with me.