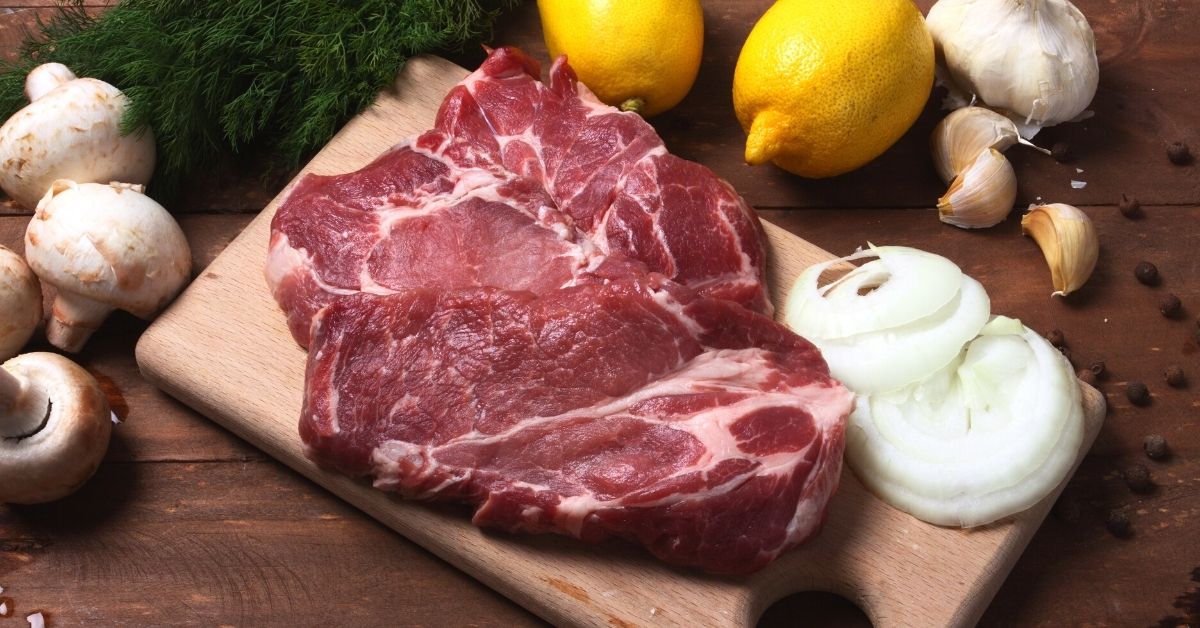 Juicy pork. A good idea for any night of the week. Why? Simple ingredients, simple process, simple recipe.

Pork steaks go well with just about any side dishes. Green beans work great. And no pork recipes are as convenient as easy-baked pork steaks, popping your seasoned pork meat on a baking sheet into the oven and stepping away to relax.

Add in the satisfaction of knowing you probably paid a third of the price of chicken and turkey for those pork steaks. Win-win-win.

But you know what’s not satisfying? When a good steak comes out chewy and tough from baking the cut of meat too long or at too high heat.

So, here’s how to make sure your efforts yield a tasty pork dinner. I answer the most commonly asked questions, including how long to bake pork steaks at 400 degrees Fahrenheit (spoiler alert – it depends).

Pork chops are also leaner, which is great health-wise, but can result in dryer meat. Pork steak is more succulent because it has more fatty marbling than pork chops.

By the way, did you know there’s a big difference between pork loin and pork tenderloin, too? They require different cooking methods, so be sure to know the difference before your next pork dinner!

What Temperature is Pork Done?

According to the National Pork Board, pork is at a safe internal temperature to eat at a minimum of 145 degrees F. This applies to fresh cuts of meat, such as pork tenderloin, pork loin, or pork shoulder steaks. For ground pork, 160 degrees is best, as there’s more potential for bacteria that needs to be burned away.

For fresh pork, the internal temperature of the steaks at 145-150 degrees signifies medium-rare. If you cut into thick pork steaks, you should see a little bit of pink inside.

Medium at 150-155 degrees for the internal temperature of the steaks will show significantly less pink but not completely uniformly white to the eye.

For a tender piece of pork, try to aim between 145-150 degrees on the thermometer before removing from the oven. That pink might be intimidating to sink your teeth into, but trust your thermometer when it shows the safe internal pork temperature.

And hey, if you take it out too late and wind up with dry pork, that’s what Kinder’s barbecue sauce is for, right?

(By the way, how do I get a job at the National Pork Board? Anybody have a connection? It just sounds like a delicious place to work.)

What Temperature Should I Cook My Pork Steaks?

The best temperature to cook pork steaks is 400 degrees F / 204 degrees C as long as you’re vigilant with the thermometer and make sure you don’t overcook it. That temp may seem high, but cooking it any lower takes too long…

Given the goal is to get to 145-150 degrees, you might be tempted to cook at low oven temperatures, like 200 degrees. The problem is that pork roasts take about 40 to 45 minutes per pound at 200 degrees. So, cooking 3 pounds of thick pork steaks could take over 2 hours in the oven. That cooking time is unnecessarily long, especially if you’re hungry from the start!

That five-minute differential is due to the thickness of the steak. Thinner steaks need a bit more attention with your meat thermometer, while the ones more than an inch thick will take slightly longer.

The point is that a 400 degrees F oven will result in a delicious, fast and easy pork steak recipe. But if you don’t have a meat thermometer, you can drop that oven temp to 200 degrees and add that extra 50-60 minutes to your cook time to be safe.

Hold on, though. Not so fast. Don’t go off and cook just yet. I’ve answered the basic questions, but there’s more crucial info to know when baking pork.

So, I’m going to answer more of the most commonly asked questions about baking pork…

Should I Bring Pork to Room Temp Before Cooking?

Just like a high-quality beef steak, boneless and bone-in pork steaks should be brought to room temperature before placing it in the oven. Placing the pork straight from the fridge into the oven can make the cooking time a bit more unpredictable.

How early do you need to take the pork out of the fridge? An extra 7-10 minutes? Maybe. It depends on how cold your fridge is and how hot the oven is.

You’re better off just taking the meat out of the fridge about 15 to 30 minutes before throwing it in the oven.

One thing you could do while you wait since you’ll be bored anyway? Pat the steaks dry with a paper towel and season them.

How Should I Season Pork Steak?

The short answer is, it’s hard to go wrong. Maybe there’s a dry rub you like to use in a pork chop recipe, such as a mix of garlic powder, black pepper, onion powder, paprika, and a little (or a lot of) brown sugar. That’ll work.

The important thing to remember is to only use a pinch of seasoning salt. Pork is already pretty high in sodium and will taste like an ocean if you shower it with salt as you would a rib eye steak.

Before you apply the seasoning, baste the patted dry steaks with olive oil. This will ensure it doesn’t stick to the aluminum foil-lined baking dish while it cooks. Plus, it’ll likely come out of the oven an appetizing golden brown.

Instead of seasoning while the pork steak rests in the fridge before the oven, you can also marinate them. You can find many pre-made options for delicious marinade, but typical ingredients include soy sauce, honey, lemon juice, and Worcestershire sauce.

Pork steaks don’t take long to marinate. Place the steaks in a ziplock bag with the marinade for a half hour. Then, they’re ready to go in a baking pan lined with aluminum foil onto the middle rack of your preheated oven. Space out each steak from each other, so they’re not overlapping.

How Long Should Pork Steaks Rest After Baking?

It’s important to let your meat rest after removing it from heat to let the juices redistribute. Don’t worry, you won’t have to wait long for pork. You can dig in after letting the pork rest for 5 minutes.

How Long To Cook Boneless Pork Steaks in the Slow Cooker?

Want to go low and slow in the slow cooker instead of quickly in the oven? Anticipate 2 to 4 hours on high, or 4-6 hours on low. Slow cookers are different, so check the temperature with the meat thermometer to remove once it hits 145 degrees in the thickest part of the meat.

If kept in an airtight container, your cooked pork steaks should last 3-4 days in the fridge. Cooked pork can be frozen indefinitely; however, it’s best to thaw and use it within 4-6 months.

Reheating should only take about 10 to 15 minutes. Since the meat has already been cooked, you only need to poke it with your finger to tell if it’s hot enough and ready to eat. Or, if you want to be exact, remove it when the internal temp reaches 145 degrees.

Now you know everything you need to know to slay at the best pork recipe for budget, convenience, and flexibility for your own taste buds. I happen to like it spicy, so save some BBQ sauce and Sriracha for me!