How Long Does Fudge Last? (Can It Go Bad?) 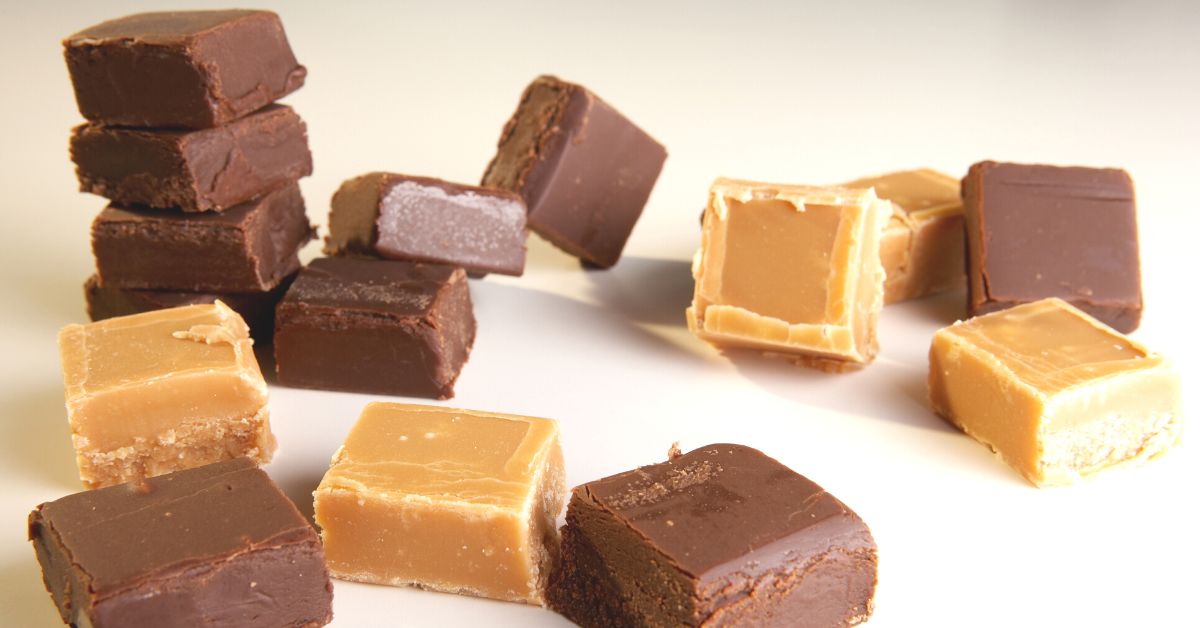 With its melt-in-your-mouth, creamy texture, fudge typically doesn’t last long in my house. However, during the holiday season or after an over-ambitious baking session, I sometimes have more fudge than I can eat quickly.

I certainly don’t want it to go to waste, and I bet you don’t either! So, I’ve done my research to answer the following questions:

I answer all those questions below and more, teaching you how to store fudge to ensure every luscious bite is enjoyed.

But first, do you know the story of how fudge was made by mistake! (Oh, what a glorious mistake!)

How Did Fudge Originate?

“Oh, fudge!” Those words were first yelled in frustration, but they became equivalent to “Eureka!” when a confectionary mistake turned into a delight. At least that’s how the story goes…

The preferred story goes that on Valentine’s Day in 1886, an anonymous confectioner’s batch of caramel re-crystalized into the texture we now recognize as fudge. The confectioner supposedly yelled, “Oh, fudge!” in frustration.

Thankfully, they must have tasted their “failure” and realized it was perhaps their greatest creation. I like to imagine them tasting it and exclaiming “Oh, fudge!” again with a whole new meaning.

But in truth, not a lot is known about the origin of fudge. We know it was invented near the end of the 1800s in the United States, but whether it was Valentine’s Day 1886 is still debated.

We do, however, know more about its popularization…

Documented mentions of fudge appeared in the late 1880s and early 1890s. Around this time, many periodicals and advertisements printed fudge recipes. It’s also mentioned in personal letters and diaries.

One such letter written by Emelyn Battersby Hartridge recounted her purchasing a box of fudge for 40 cents a pound in 1886 in Baltimore, Maryland. Fudge shops also started to appear in tourist places in Michigan in 1887.

First, the decreasing price of refined white sugar allowed more people to make this delicious treat. Second, it’s easy to make at home. Thus, people could make delicious candy at home that would normally be found at a fancy shop.

How Long Does Fudge Last?

Fudge is best stored at room temperature for up to 2 weeks (if stored properly). You can refrigerate or freeze it to last longer, but that can result in dried-out fudge. If you have to store fudge long term, you must store it properly to preserve its goodness. Let me explain further…

The following guide explains how long fudge will stay good depending on where you store it. I also explain the best way to store it to keep it fresh for the greatest amount of time.

(Speaking of fudge, you might want to check out what wine chocolate pairs with.)

Of course, storing your fudge on the counter during hot summer days is not a good idea. If it’s around too much heat for a long time, it’ll melt, reharden, dry out, etc. You need to store it properly in a cool place. Here’s how…

For best results, layer the fudge in wax paper or parchment paper and store it in an airtight container. Keep the container in a cool, dry, and dark place (like your pantry). That will help prevent the fudge from melting.

Wax paper is a good option because it helps prevent the fudge from sticking. Parchment works almost as well and is also a viable option.

Using a plastic bag is okay, as long as you can seal it properly. Plastic wrap can also be used, but that is better to use when wrapping up smaller pieces of fudge, like pieces you will share with friends or family. If using plastic wrap, wrap it completely around at least a few times.

Wrapping your fudge in aluminum foil can work. However, the foil does not seal as well as bags with a zip lock feature. You also might find that your fudge will stick to it unless you wrap it in wax paper first.

Storing fudge at room temp is best because storing it in a fridge can dry it out. But, if you’re not going to eat it within two weeks, you can pop it in the fridge to make it last about 1 month.

If you’re storing it in the fridge, take even more care to ensure it’s wrapped and airtight…

How to Store Fudge in the Refrigerator

To store your fudge in the fridge, ensure you have a suitable, air-tight container. Having a good seal to keep out the air is critical to prevent drying out. Place wax or parchment paper between the layers of fudge or, better yet, wrap the fudge with it and then place in the airtight container.

If you need to store your fudge long-term, freezing it is your best option. Fudge correctly stored in the freezer can last 3 months. While some claim frozen fudge can last up to a year, I would be leary of freezer burn.

How Do You Store Fudge Long Term?

First, wrap it in wax paper. Then wrap it in a few layers of plastic wrap or aluminum foil. Then put the wrapped fudge in an air-tight container or freezer bag and seal it tight.

To properly store fudge in the freezer, you need to keep it away from excess moisture, air, and temperature changes.

It’s a good idea to store fudge in the back of the freezer. If you keep it in the front near the door, it might be affected by the temperature fluctuation from the door being consistently opened and closed.

When ready to eat the fudge, simply take it out of the freezer and let it thaw for a couple of hours at room temperature. Try not to remove any more than you can eat within 1 week or 2 at most.

How Long Does Fudge Take to Defrost?

You can eat fudge straight out of the freezer. However, fudge only takes 2-3 hours to defrost on the counter. Personally, I like to take a bite out to instantly satisfy my craving and then wait for it to thaw to fully enjoy its fudgy texture.

The Best Way to Store Fudge

Fudge is best stored at room temperature wrapped in wax paper inside an airtight container that’s kept in a cool, dry place, like your pantry. However, if you are not going to eat it all within 2 weeks, you can store it in the fridge or freezer. Just be sure to keep it wrapped tight in an airtight container.

Fudge can go wrong, but it does not spoil in the same way other foods do. Most likely, you will find that the quality of your fudge will change. The fudge’s texture, flavor, and appearance can become degraded, and eating it will not be a pleasant experience.

Temperature changes can cause your fudge to develop a slimy texture on the surface of the fudge. Or, if it is exposed to too much air, the texture can become dry, crumbly, and hard. If your fudge has added candies or fruit, those can become moldy, put off a foul odor, and should be thrown out.

Can You Get Sick From Eating Old Fudge?

Fudge is not one of those foods that typically make people sick. It’s more likely to just taste bad than to actually make you sick. If fudge does spoil, it is usually due to being exposed to too much moisture, air, or temperature changes.

Check for signs of spoilage, such as foul odor or mold, or for changes in the texture. If you notice any, then throw it away. No one wants to eat slimy fudge!

Fudge is a crystalline candy, which means the texture of fudge in not hard or soft. Fudge is made from a mixture of sugar, butter, and milk that’s heated and then cooled. However, there’s a wide range of different types of fudge.

While chocolate fudge is most common, you can also make fudge with different flavors. Peanut butter fudge (or my favorite chocolate peanut butter) is also a very popular flavor that you can find in almost any candy store with a fudge counter.

Many types of fudge may have added nuts, fruit, candies, or drizzled chocolate. Confectioners can let their creativity go wild!