The Best Roast for Jerky (& Other Cuts) 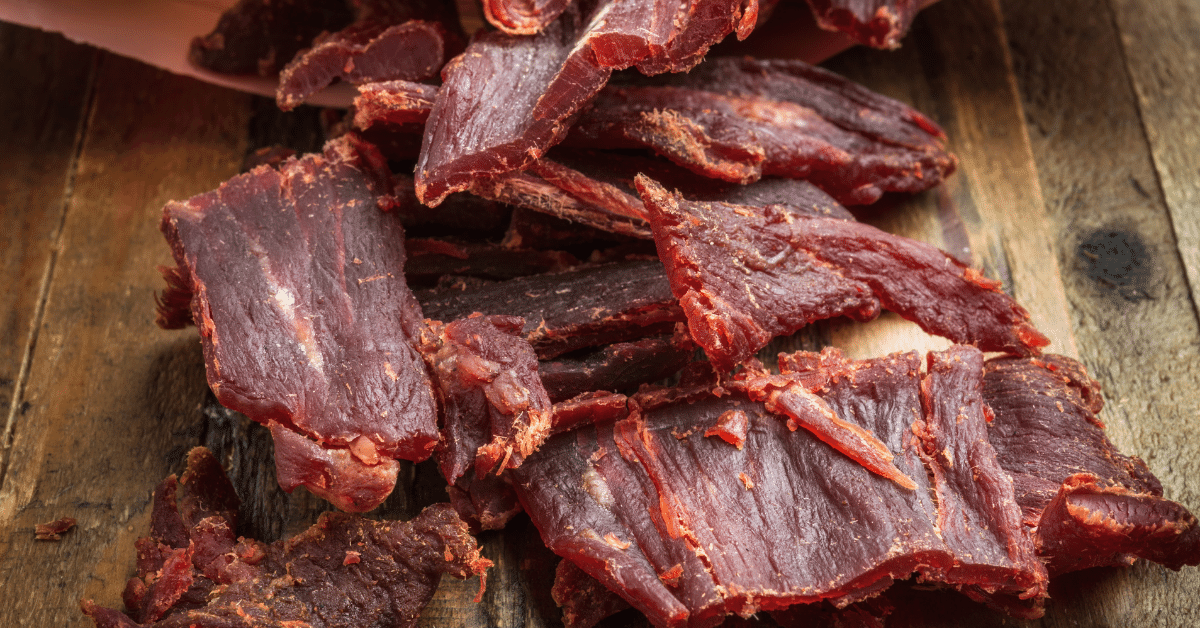 There is nothing more delicious than that first tender bite of beef jerky. Especially when you made it yourself!

Are you new to the jerky game and trying to figure out what meat to use to make the best beef jerky? Even if it isn’t your first time making jerky, you may be curious about different cuts of beef and which ones can give you the best results.

If that sounds like you, then you’re in luck!

The following is my guide explaining the most popular cuts of beef used in the jerky-making process. Plus, helpful tips for purchasing your meat.

Popular Types of Beef for Jerky

When it comes to breaking down a steer, there are nine primal beef cuts: chuck, short loin, flank, round, short plate, foreshank, brisket, and rib.

Beyond the primal cuts, there are many smaller cuts that may sound familiar to you. They include tenderloin, tri-tip, ribeye, and T-bone.

The following is an overview of the best cuts of beef that are great options to use with your favorite jerky recipe. I’ve organized them by increasing price.

Bottom round roast is one of the popular round cuts of beef and comes from the round primal. It is also known as bottom round over roast and round roast.

This lean cut of beef is one of the most popular cuts for making homemade beef jerky because it is extra lean and has a low-fat content. This lean meat is a great choice because it has little intramuscular marbling, thereby producing tender jerky.

While it does tend to be a tougher meat than its counterpart, top round, it can still be a great choice for jerky! It is also less expensive than other cuts of beef. Win, win!

This cut of beef also comes from the round primal. It is sometimes called inside round steak or London broil.

Top round is extra lean and does not contain excess fat.

It is also an economical meat, so most commercial jerky makers use it. All in all, top round roast is a great choice for making jerky!

Pectoral meat is also known as special trim. It comes from the chuck primal and is a portion of the brisket.

It has a medium leanness, but can be very flavorful. It has medium marbling and is more tender than other cuts of beef.

It is surprisingly less expensive than certain cuts, despite its popularity!

Eye of round also comes from the round primal. While it is similar in shape to the Tenderloin, it is more tender than that cut.

This very lean meat also contains little to no intramuscular marbling. Like the bottom round, it may be less flavorful than other cuts, but it will make more tender jerky.

It tends to be pricier than other cuts.

Sirloin tip, sometimes called knuckle or round tip, is less tender than its counterpart top sirloin. Even though it is a less popular choice than the rounds, it is still a great option for jerky meat.

It is extra lean, and also has little marbling. While it is less tender than other cuts, it can be more flavorful.

It also tends to be a little more expensive.

Sometimes referred to as blade meat, cap, or wedge meat, lifter meat is removed from the outer side of the rib. It comes from the rib primal cut.

This meat can be slightly more expensive, and only offers a medium leanness. It also has a medium amount of marbling in the muscle.

It comes from the flank primal and is a lean cut. The grain of the meat is long.

It is a lean cut of beef, and contains a little bit of interior marbling. While it is known for its meaty flavor, it is less tender than other cuts.

It tends to be more expensive than other cuts you can purchase.

Which is the Best Cut of Beef for Jerky?

When looking for the right beef to make the most tender, thin slices of beef jerky, there are a few criteria you’ll want to keep in mind. While two cuts might be offered for great prices, slightly more expensive meat might make much tastier jerky.

One of the biggest considerations for choosing good jerky is to look at the fat content. You want a cut of beef with as little fat content as possible.

That’s because the composition of fat prevents it from being fully dried out during the dehydration process.

Look for Economical, Yet Tasty Cuts

I recommend finding that “sweet spot” between money and flavor. While I do not recommend purchasing the most expensive cut of meat you can find, you also do not want the cheapest meat around. You can, however, get a good cut of meat without breaking the bank.

The jerky-making process can actually turn tougher cuts of meat into delicious tender jerky. That means you can take less expensive meat and make mouthwatering jerky.

Consider saving fancier cuts of meat for dinner time instead!

When you go to your local butcher or grocery store, I have a few tips that can help you get the best meat for your jerky.

One important thing when choosing the right meat is to check the expiration date. Be sure to only purchase fresh meat. Fresher meat equals better taste.

Avoid any meat that has a weird smell or dark spots.

The food dehydrator process will shrink your meat’s weight content by about 50-75%. You’ll need to buy a sufficient amount of meat accordingly.

Keep Your Eye Out for Sales

Why pay full price for meat when you can get it for a fraction of the price when it goes on sale? Grocery stores have great apps now that will even send you sales notifications.

You can also choose a big box store to buy your meat. Paying in bulk at Costco is a great way to save money!

Your local butcher may have great jerky tips and tricks for you! Ask them what they recommend and for their advice. By showing you respect their opinion, they’ll like and respect you.

By becoming a familiar face, they might save great cuts for you or alert you to upcoming sales.

Butchers can also save you time in the jerky-making process by pre-slicing your beef. Sometimes they might charge a small service fee but other times, they’ll do it for free!